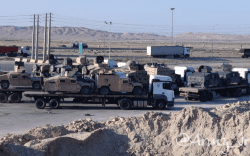 A social media post originating in Iran posted several images of Humvees loaded on transport trucks stopped on the side of an Iranian highway.

The equipment is likely a tiny portion of the massive military cache the Biden administration abandoned in Afghanistan. It would make sense for the Taliban to sell off anything they don’t intend to use in order to fund their government without having to deal with any U.S. demands.

Iran is an enemy of the United States and a major backer of terrorism. Joe Biden may be guilty of providing material support or resources to a designated foreign terrorist organization (18 U.S. Code 2339B).

Obama gave the mullahs billions in cash on pallets, his pupil just gave them warfighting equipment.