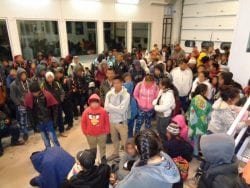 ANTELOPE WELLS, N.M. – U.S. Border Patrol agents arrest a group of 290 illegal aliens near the Forward Operating Base located at the Antelope Wells Port of Entry.

Border Patrol Agents working at the Camp Bounds FOB early this morning observed a large group illegally crossing the border and making their way into the United States.  The group consisted of subjects from Guatemala, Nicaragua, El Salvador and Honduras.  On Thursday, Border Patrol agents had observed a group of subjects dressed in camouflage hiding on the Mexican side of the border near the site of the illegal entry.  They appeared to be scouting the area for possible vulnerabilities, thus allowing the agents to be prepared for illegal activity during the overnight periods.

During initial interviews and screenings, Border Patrol agents noticed a juvenile Guatemalan male with signs of illness.  The juvenile and his father were subsequently transported, via ambulance, to a local hospital for treatment.  Temperatures in the boot heel area this morning were below freezing and the smugglers associated with this event showed no sense of safety and or value to human life when they guided this group into the United States illegally.

During the current fiscal year, over 27 groups consisting of more than 100 people have been apprehended in this area.  In many instances, criminal organizations are saturating areas with large groups with the belief that they can smuggle narcotics or other contraband into the United States while Border Patrol agents are occupied. The U.S. Border Patrol will continue to enforce the rule of law while ensuring that our communities are safe.