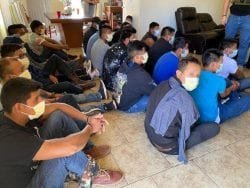 Yesterday, Rio Grande City agents received information of a possible stash house located in Roma, Texas.  As agents and deputies from the Starr County Sheriff’s Office arrived at the residence, they observed suspected illegal aliens absconding from the property.  Agents apprehended a total of 59 individuals at the residence and the surrounding area. One subject who attempted to abscond, sustained an ankle injury after jumping a nearby fence. The subject was transferred and admitted into a local hospital to be treated for his injury. While at the hospital, Border Patrol was advised the subject was COVID-19 positive.

Later that afternoon, Hidalgo County Sheriff’s Office (HCSO) called the Weslaco Border Patrol Station and requested assistance for a possible stash house in Donna, Texas.  Agents responded to the location to assist.  HCSO advised the agents that they had received a 911 call from someone inside the residence. Agents assisted the deputies and apprehended a total of 41 subjects illegally present in the United States.  The illegal aliens were citizens of Guatemala, Honduras, Nicaragua, Ecuador, and Mexico.