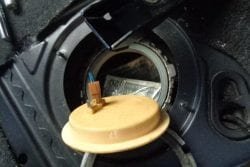 ESCONDIDO, Calif. — U.S. Border Patrol agents arrested a man on Wednesday morning with more than $960,000 hidden inside his SUV.

The driver, a 26-year-old Mexican national was questioned by agents after a service K-9 alerted to the man’s vehicle.  A search of the SUV revealed 65 plastic-wrapped bundles of cash stuffed inside the vehicle’s gas tank.  A subsequent count resulted in $967,460 in U.S. currency.

The man was arrested and turned over to Homeland Security Investigations with pending criminal proceedings.  The currency and vehicle were seized by the U.S. Border Patrol.

“The U.S. Border Patrol works tirelessly to protect the Homeland from transnational criminal organizations- the same criminal enterprises that poison our communities with narcotics and smuggle human beings like cargo.  Seizing illicit gains from these criminal enterprises is one of the tactics the USBP uses to keep our country safe,” said Chief Patrol Agent Aaron Heitke.