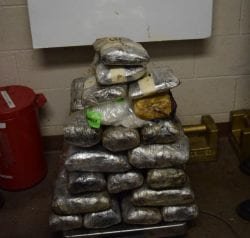 “The smuggling of illicit narcotics is a serious international health and security threat,” said Port Director Eugene Crawford, Laredo Port of Entry. “CBP will continue to intercept these dangerous drugs using every tool at our disposal.”

The first enforcement action occurred on March 8th, at the Juarez-Lincoln Bridge after a CBP officer encountered a 2013 Chevrolet Malibu making entry from Mexico. The vehicle was referred for a secondary inspection. Following a canine and non-intrusive imaging system inspection, CBP officers discovered a total of three packages containing 9.52 pounds of alleged methamphetamine within the vehicle. The narcotics had an estimated street value of $190,477.

The second seizure, also on March 8, occurred at the Colombia-Solidarity Bridge, when CBP officers assigned to the cargo facility encountered a 2001 Chevrolet Silverado hauling a shipment of polyurethane decorations arriving from Mexico. The truck and shipment were referred for a secondary inspection. Following a canine and non-intrusive imaging system examination, CBP officers discovered a total of 62 packages containing 40.38 pounds of alleged methamphetamine concealed within the shipment. The narcotics had an estimated street value of $807,677.

CBP Officers Seize $1 Million Worth of Methamphetamine at Laredo Port of Entry is original content from Conservative Daily News – Where Americans go for news, current events and commentary they can trust – Conservative News Website for U.S. News, Political Cartoons and more.