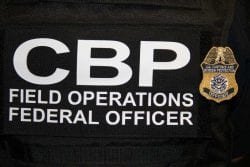 CALEXICO, Calif. — Weekend enforcement efforts by U.S. Customs and Border Protection officers at the downtown Calexico port of entry this weekend resulted in the seizure of 74 pounds of hard narcotics found stashed in two vehicles, as well as the discovery of a woman concealed inside the dashboard of a small sedan – the third such human smuggling attempt encountered at the port in the last three weeks.

The first incident occurred at about 6 p.m., on May 3, when CBP officers encountered a 21-year-old male U.S. citizen and resident of Mexicali, Baja California, driving a 1988 Ford Ranger as he approached a vehicle inspection booth.  The CBP officer referred the driver and his pickup for a more in-depth examination.

CBP officers screened the truck using the port’s imaging system and detected anomalies in the roof area of the camper shell.  Officers inspected the area and discovered 24 wrapped packages containing 56 pounds of methamphetamine hidden inside a non-factory compartment built into the roof of the shell. The methamphetamine is valued at approximately $90,000.

The second incident occurred on Saturday, May 4, when CBP officers encountered a 35-year-old male Mexican citizen and legal permanent resident of U.S. driving a 2012 Jeep Liberty SUV.  During the initial inspection, a CBP officer noticed tampering around the transmission housing of the vehicle and referred both the driver, a resident of National City, and his vehicle for further examination.

A canine team screened the vehicle and the detector dog alerted to the vehicle’s undercarriage.  Following an intensive search, officers discovered 16 wrapped packages containing a total of 17 pounds of heroin stashed inside the transmission of the vehicle. The heroin has an estimated street value of $130,000.

The drivers of both vehicles were arrested for the alleged narcotics smuggling attempts and turned over to the custody of Homeland Security Investigations agents.  They were both later booked into Imperial County Jail.

The third incident occurred shortly before 12:15 a.m., on May 6, when CBP officers encountered a 30-year-old male U.S. citizen driving a 2010 Chevy Aveo. A CBP canine team screened the Aveo as the driver awaited inspection, and the human and narcotics detector dog alerted to the vehicle’s interior. Officers escorted the vehicle and driver to the inspection lot for a more in-depth examination where they ultimately discovered a woman hidden behind the dashboard area.

Officers extracted the woman, a 43-year-old Mexican citizen, from the dashboard and escorted her to a secure location for a medical evaluation and further processing.  Once emergency medical responders assessed the woman’s wellbeing, CBP officers confirmed that she had no legal ability to enter the United States and took her into custody.

The driver was arrested and later transported to the Imperial County Jail to await criminal arraignment on federal human smuggling charges.

CBP officers at the border crossings in Southern California routinely stop illegal activity, while processing millions of legitimate travelers into the United States.  Those statistics can be found here: CBP Enforcement Statistics.

On Monday, April 22, 2019, Calexico CBP officers stopped a US citizen attempting to smuggle one Mexican national behind the backseat area of a vehicle. Also, in another incident officers discovered someone being smuggled inside a dashboard. Read about it  here.