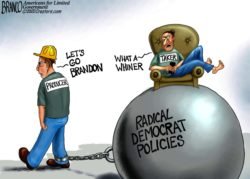 Conservatives have been delighted to see blue states (California and New York for example) lose citizens to red states (Florida and Texas for example) and have celebrated this proof that people will vote with their feet (or their U-Haul trailers) when they’ve had enough Democrat crime and taxes in their old leftist states, which are falling apart more obviously every day.

One drawback to this right-minded and assuring trend to vacate leftist states where insanity and stupidity rule, is that the people coming from the former wealthy Democrat-run red states and cities have become accustomed to facilities like sidewalks, city streets with curbs and storm drainage at every intersection of the city, things that may not be the custom in small Montana and Idaho towns. Some other not-so-desirable things that may not be found in smaller towns across the nation, but are abundant in big Democrat cities, are parks and busy city streets lined with tents and campers of the homeless and the druggies who are a burden to society, along with the sky-rocketing murder rate seen in too many Democrat-run cities lately. In an attempt to leave the homeless, the druggies, the crime and high taxes behind, people may well leave the Democrat cities, but pine for some of the expensive things they left behind in the blue city and start making demands for wider streets, more sidewalks and better drainage to the small, low-tax city they move to, which means that the new city then becomes more expensive and needs higher taxes to maintain the higher standards of the new settlers. This situation is the unintended consequence of people flocking to more pristine, low-tax cities, and then imposing the problems of the Democrat city they just vacated, on the new city.

But maybe this picture is not quite complete. Maybe the vacating of the old leftist cities is part of a plot by Democrat fifth-columnists to infiltrate red cities and states with leftist ideas of higher taxes and idiotic practices, like they had back home. A good example of this is Austin, Texas. It’s true that Austin shares, with the remainder of the conservative state, the pleasure of having no state income tax, but Austin is also very leftist in its policies and seems to be the destination of many people who leave California. So maybe conservatives had better tone down their celebration about winning the culture war and start questioning and challenging the ideas coming with the new arrivals from blue states: these people may well be plants from the Socialist left to spread their poison to the rest of the nation.

Any assumption that people on the left will one day realize the idiocy of their radical ideas and begin voting for more conservative and traditional candidates, instead of the far-left loons in charge in Democrat states, and begin behaving more decently, is unlikely to happen. The best example of the leftist rejection of common sense and sticking with stupidity and national destruction, is Biden’s opening of the southern border and allowing two million people, so far in his presidency, to invade America, after Donald Trump had fixed the invasion problem to the great benefit of America. Every person crossing the border illegally is the cancellation of one American citizen’s vote, and allows one more potentially diseased or criminal person to enter and have to be dealt with later as they get sick, practice their criminal trade, or go on welfare.