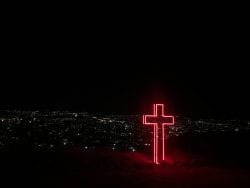 Democrats have passed a resolution in which they have framed religious liberty as a risk to civil rights. The Democratic National Committee unanimously passed this resolution in a meeting in San Francisco on Aug. 24.

The resolution indicated that 70 percent of “religiously unaffiliated” Americans voted Democrat and embrace the values that the Democrat Party hold.

One of the directors of the Secular Coalition of American, Sarah Levin, said the goal was for policy to be acquired through science instead of sectarian beliefs.

.@TheDemocrats Summer Meeting Resolution #38, which recognized the secular community, had a lot to say about our growth, impact, and the importance of #secularvalues. Take a look: [THREAD]

In the resolution, it claims that nonreligious Americans have been victims of bias and exclusion throughout American society. It argues that religion has dominated policymaking which has created an unfair attack against atheists, minorities, and the LGBT community.

Evangelicals solidified President Trump’s 2016 election, so this group is on the left’s hit list. Approximately 80 percent of evangelical Christians voted for Trump in the 2016 electorate. Since his inauguration, many Christians have been very pleased with the president’s accomplishments, and promises kept thus far. Whether it be the judges he has appointed, pro-life policies, and his continued support of Israel, it seems safe to say that his evangelical poll will only thrive.

“We are fighting for all Americans, and we are embracing the faith community,” Trump said to a crowd at a rally. “When I asked for your support in 2016, Americans of faith were under assault. But the shameful attempt to suppress religious believers ended the day I took the oath of office.”

Barak Obama’s former faith adviser during 2012, sharply criticizes this resolution that aims to degrade Christians and those with conservative beliefs. Michael Wear, who served on one of Obama’s faith-based initiatives, was not pleased with the decision. Wear called this blatantly aggressive move politically stupid and suggests that it will only hinder Democrats from receiving any religious voter support.

I just want to be clear. This is both politically stupid, but also, just stupid on a fundamental level that transcends electoral politics.

“Trump is absolutely going to run this into the ground, and not just with white evangelicals,” Wear stated.

Christian persecution around the world is a stark contrast to the United States. However, American Christians are facing more discrimination by the Democrat Party at an abundantly alarming rate.

Just recently, a church in the San Diego area was trashed due to its opposition to drag queens reading books to children at public libraries. The church was resistant to “Drag Queen Storytime.” These are taxpayer-funded events where men dress up in drag and associate with children. For the past few years, these story hours have become more and more popular in big liberal cities.

One of the goals is to engage the children in the play of gender fluidity and to have them exposed to queer role models. At one of these events, a drag queen was captured on video teaching the children how to twerk and dance like strippers.

Most Democrats’ world views are directly opposed to that of a biblical perspective. Christianity often gets associated with the Republican Party, which is often criticized by the left. However, the Democrats have made it exuberantly clear that Christian morals and values have no place within their party.

The Democratic Party continues to ostracize Christians and then mock their support of President Trump. If Christians show support of traditional marriage, they are labeled homophobic bigots. The resolution stated that 80 percent of religiously unaffiliated Democrats support same-sex marriage. When abortion is opposed, the term “hating women” comes into play.

The Secular Coalition of America is heavily backing demeaning Christian values and criticizing Americans of faith. This group continues to grow and lobby on behalf of atheists.

Religious liberty is under attack at a stronger level than ever in American history. Just basing off the type of language used by Democrats to describe Christians, they make it appear that they are the most privileged religious class in the world. Several studies show that Christians are the most persecuted religious group in the world as a whole. Reaching near genocide levels, news Christian persecution is continued to be stifled and is not being confronted.

In the Middle East, Christianity faces the real threat of being wiped out completely. Christians in Nigeria are continuing to be slaughtered in unprecedented numbers, but yet the media has failed to highlight this ever-growing catastrophe.

A study has published that the most-harassed religious group, Christianity, is facing oppression in 143 countries currently. An ample reason for this is said to be the increased government restrictions put on religious practices and the stifling of beliefs.

While American Christians have had it pretty good up until this point, it is clear to see that more persecution from the left is a likely probability. Americans have much fewer religious restrictions comparatively to the rest of the world. However, that is changing, and more and more American Christians realize the reality of what may be to come is this issue is not addressed.

Religious liberty is arguably one of the most important staples of the United States. Watching this freedom being stolen away is a tragedy that is agreed upon but not only Christians but for any other freedom-loving citizen. While the Democratic Party feverishly touts the concept of tolerance and acceptance, the reality is that they do not want it to extend to Christians.

It is now at a critical point where Christians can unify and uphold their rights or continue to let religious freedoms be swept away. The government does not rule our faith.

Originally published at Patriots Of The Lord.

Content created by Conservative Daily News and some content syndicated through CDN is available for re-publication without charge under the Creative Commons license. Visit our syndication page for details.