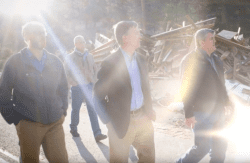 John Hickenlooper tossed his hat into the congested Democratic presidential nomination race early Monday with a campaign video that focuses on his career as a two-term Colorado governor and two-term Denver mayor.

Hickenlooper just finished his second term in the statehouse where he was a popular, anti-gun governor.

It’s the left’s extremist progressive agenda that he toutsin the video.

“I’ve proven again and again I can bring people together to produce the progressive change Washington has failed to deliver.” Hickenlooper says in the video.

As governor, Hickenlooper signed an expansion of Medicaid in 2013 and signed the state’s most restrictive gun laws.

Hickenlooper was the first Denver mayor to be elected Colorado governor in 120 years. And he won election as mayor of Denver with no political experience. He was re-elected in 2014 after running an entirely positive campaign.

Hickenlooper was an mayor who was able to lower the city’s deficits by persuading voters to accept sales taxes to pay for a new mass transit system. He also expanded free preschool to every 4-year-old.

Hickenlooper followed an unusual route into politics, beginning his professional life as a geologist with Buckhorn Petroleum in the 1980s. But the oil bust in the mid-’80s cost him his job in 1986. There were no jobs to be had in the oil industry, so Hickenlooper went into the brewpub business, opening the Wynkoop Brewing Co. which made him a millionaire.

Hickenlooper will kick off his 2020 campaign at a hometown event in Denver Thursday before heading to Iowa.

Despite an amazing economy that his state has enjoyed, Hickenlooper has been generally critical of the president’s approach to business, border security and the nomination of Brett Kavanaugh to the Supreme Court.