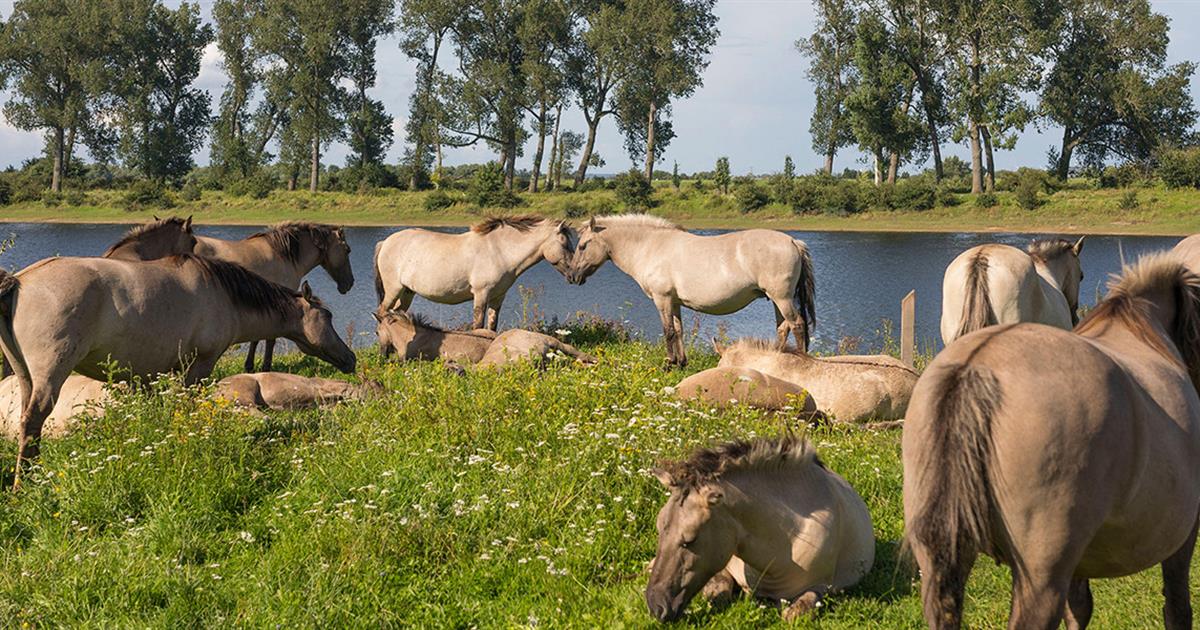 ‘Pragmatic rewilding’ restores damaged ecosystems and harnesses private money, with benefits for all

Back in the 1980s, the Dutch were having problems with their famous “dikes and dams” approach to delta management. The landscape was boring; waterways were lifeless; people faced ever-more-regular and costly summer floods. A local foundation offered a prize for innovative solutions. The winning entry, Plan Stork, was inspired by the radical new idea that nature could be an ally for development. It might sound odd, but key to the plan was clay mining.

Two not-for-profits — WWF-Netherlands and ARK Nature — got two brick companies to help restore the flood plain of the Gelderse Poort. Over 25 years they bought up farmland and removed the valuable silts and clays that had built up over the decades between the dikes, in the process restoring and repairing the historic system of braids and pools.

The result was a true win-win. Houses were built, money was made and flood risks were reduced. ARK Nature brought in free-roaming horses and cattle to graze the land, and reintroduced beavers, otters and sturgeon. Dunes came back, and water filtering through the sands created surprising new ecosystems. The Gelderse Poort became an asset for nature and people and a source of regional pride.

This is a great example of “pragmatic rewilding,” an idea now entering mainstream discussions about how to reverse nature’s decline, especially in Western Europe. The idea is to “reset” damaged ecosystems, to allow nature to recover in ways that offer new economic opportunities along with solutions to social and environmental challenges. It harnesses private money for ecosystem repair with benefits for all.

As a conservationist, I welcome the global ambition of conserving at least 30 percent of our planet’s land and seas in protected areas by the year 2030 (the so-called 30-by-30 campaign). Dozens of nations have signed on to this goal, and billions of dollars have been committed; a formal pact may be hashed out at the  Convention for Biological Diversity meeting, scheduled for later this year in China. But it will be expensive. Environmental groups, including the World Wildlife Fund (WWF) and the Nature Conservancy, are calling for the United Nations to commit at least $60 billion annually to this cause. This seems unrealistic, especially at a time when public finances are under pressure from the impacts of the pandemic and the war in Ukraine.

Pragmatic rewilding may offer an answer.

When most people think of biodiversity conservation, they probably think about setting aside national parks or protecting an area where an endangered species lives. While very worthwhile, this is an expensive approach, and it can sometimes feel a little sad trying to stem losses already underway.

By contrast, the idea of rewilding offers a more hopeful narrative that is transforming the field of conservation science, by focusing on repairing the function of any ecosystem, rather than trying to  preserve patches of nature that have survived from earlier centuries. It often reintroduces animals so ecosystems can recover in their own way.

The number of pragmatic rewilding projects is growing. In the Côa Valley of Portugal, where people have abandoned homes and farms over the past few decades, rewilding is bringing back wild grazing animals to repair the land, provide fire breaks and fund nature-based tourism. In England, reintroducing grazers to the  Knepp Wildland has brought back wildlife, including turtle doves and nightingales, and supported “glamping” (glamorous camping) businesses, wildlife safaris and wild meat products. In Siberia, the  Pleistocene Park rewilding project aims to replace dark shrubs and trees with sunlight-reflecting grasses and reintroduce grazing herbivores, hoping to deepen the permafrost freeze and slow the release of greenhouse gases.

These projects offer creative nature-based solutions and at the same time enhance people’s lives, offering hope and purpose for environmentally minded citizens. The Gelderse Poort rewilding project has really proven its success: More than 30 years on, its “living river” covers nearly 5,000 hectares of thriving floodplain. The city is saving on flood defense costs, citizens are enjoying outdoor leisure and local hotels are thriving.

Rewilding’s capacity to generate financial as well as social value means that there is in theory a lot of private money out there to invest in such projects. The trick is to harness it.

Financial markets are now filled with environmental, social and governance (ESG) considerations, and plenty of progressive investors and companies aspire to become both carbon-neutral and nature-positive. It can be hard, though, for them to find “bankable” projects. They need to invest at big scales, deliver a profit, and be able to measure the social and environmental impacts of their investments.

There is a lot of innovation going on now at the intersection of finance and biodiversity, similar to the push to link finance and climate. There are already “green bonds,” for example, that finance projects with good climate or environmental outcomes; and there are “carbon credits” that can be earned and sold by nature projects that remove carbon from the atmosphere or reduce its release.

Now financial experts are working to design new bonds that offer cheaper access to capital if biodiversity targets are met. And companies (including the one I work for, Ecosulis) are developing “nature recovery impact tokens” that can be produced and sold in much the same ways as carbon credits. These innovations might help to make rewilding more investable.

Rewilding helps to change the conversation. Instead of an “ask” (please protect the environment), conservation becomes an “offer” (of financial, social and natural return). This is surely the key to attracting finance for biodiversity recovery at the huge scales we need.

Paul Jepson is head of innovation for Ecosulis, a rewilding consultancy based in Oxford, England, and former director of Oxford University’s biodiversity, conservation and management master’s program. An illustrated version of his book “ Rewilding” (MIT Press, co-written with Cain Blythe) was published in the United States in April 2022.

What Mark Cuban Gets Right (and Wrong) about Student Debt "Cancellation"

Why ‘Free Trade’ Advocacy Keeps Running Into a Brick Wall

The ‘Abortion is safer than Pregnancy’ Fallacy: Taking a life…

Intelligent microrobots could one day be used in medicine