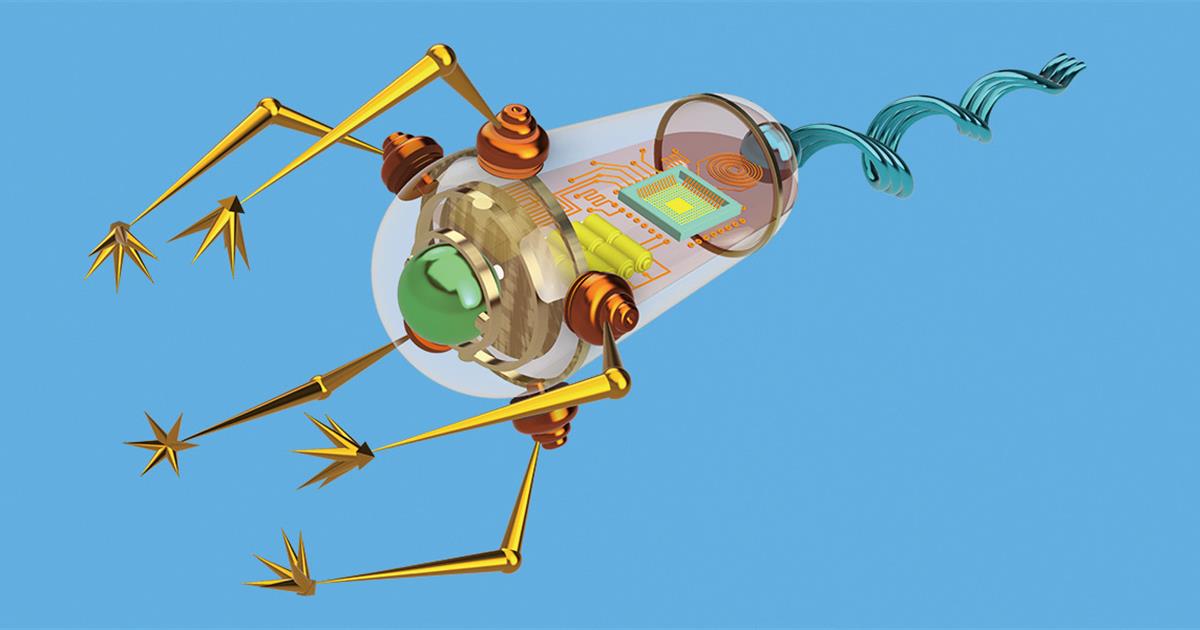 What would it take to create a truly intelligent microbot, one that can operate independently? A roboticist describes the fascinating minutiae and the medical jobs these tiny machines could do for us.

In the not-so-distant future, the surgeons who treat our ailments might be tiny machines that swim through our bodies, tracking down cancerous tumors or clearing clots from even the smallest arteries. If this sounds like science fiction, you’re not wrong: Movies like Fantastic Voyage and Innerspace have long played with the concept of shrinking machines down to the size of a single cell — yet over the past few years, advances in robotics and materials science have brought the idea ever closer to reality.

Roboticist Bradley Nelson of ETH Zürich has spent his career working to create microscopic devices like these. He says that while engineers have already built robots no bigger than a microbe that can move around and sense their environment, these still need to be controlled remotely by people. The next major challenge, he says, will be imbuing these machines with some form of intelligence so they can do their jobs independently, taking human operators out of the equation entirely.

Yet what, exactly, would it take to create a truly intelligent microrobot? And how might it be used in the real world? These are questions asked by the authors of a 2022 article in the Annual Review of Control, Robotics, and Autonomous Systems. Nelson, a coauthor of the article, spoke with  Knowable Magazine about why the prospect is so difficult and what the future of tiny intelligent machines might look like. This interview has been edited for length and clarity.

How would you define a microrobot? How small are we talking?

In general, a robot of any size is a device that works an uncertain environment; it adapts to its surroundings and can move around to achieve a goal. The classic way to think about it is that there are three pillars of robotics: First, there’s sensing — a robot has to somehow gather information about the world around it. Second, there’s motion: It has to have some kind of actuation mechanism so it can interact with that world. And third, there’s computation: It has to figure out what actions it’s going to take at any given time.

In my work, I’m usually trying to build those elements into machines that are about the size of a single cell up to a few hundred microns wide. I’m less interested in anything smaller than that. Once you go below a micron, the kinds of physics that dominate the environment change. You have to start thinking about how things like Brownian motion, the random movement of atoms and molecules, will affect your device. That’s the dominant interaction your robot will have with its environment, so the work becomes something more like chemistry than robotics.

For microrobots like the ones you’re trying to build, what would “intelligence” really mean? How much can you expect from a device that small?

Well, that’s an interesting philosophical question to have over a beer. There are a lot of ways to define it, but when I think of something that’s intelligent, it’s a very anthropomorphic viewpoint. Am I surprised by its behavior and the way it adapts to its environment? Is it doing something in a way that I find compelling and interesting? If it’s adapting, I would say there’s some intelligence there.

For example, look at something like E. coli bacteria. Each of their bodies is a single cell, maybe a micron or two long. It has chemoreceptors on its surface that can sense amino acids or other nutrients around it. It has a communication pathway back to its flagella, the rotating appendage that lets it move, and it can change how it’s cruising around your GI tract or wherever it happens to be living.

It also has a kind of software: Bits of DNA floating inside it control how it rebuilds or repairs itself to stay alive. So in a way, it’s nature’s microrobot: It has sensors, a communication pathway, a sensing algorithm, control software that guides a motor — and it’s making basic decisions. In fact, E. coli does all this so well that some roboticists are  harnessing it as part of their devices. They’re essentially hitching their microrobots to the microbe, and letting it do all the sensing and locomotion for them.

Do you take any inspiration from bacteria for your microrobots?

Absolutely. The way they navigate through their environment is incredible. They use this brilliant strategy I never would have thought of — at first, they kind of just randomly move around, but when they start sensing something good, like an amino acid or other nutrient, they will swim a little bit longer, which tends to move them gradually in that direction. It’s what we call a “biased random walk.” As an engineer, you start thinking, “Oh, that’s good.” They’re basically following a chemical gradient.

You could imagine making tiny robots that can do the same thing: Maybe they’d follow temperature gradients, or pH gradients, or the chemical signature of a certain disease, for instance. So, yes, I’m very inspired by the natural world. There’s an incredibly rich array of complex “intelligent” behaviors that have evolved in tiny organisms, and if I can tease out a way to replicate some of those behaviors in robots, it’s very exciting.

What are some of the hurdles to overcome in order to build robots like that?

Oh, there are plenty. I’ve been working in the field of trying to build microrobots since 2003. At first, we were just trying to figure out how to make these things move, and how to control them. Then we started asking, what functions are they going to do? What kind of chemistries or functionalities are you going to put on the devices? Is there a way to give them some kind of autonomy?

We’re still working on that last one. We’ve started exploring polymers and materials that can react to their environment in some way, like by automatically changing their shape so they can fit through narrow areas and things like that. But the biggest hurdle is really bringing all the various components together. To be successful, a microrobot has to sense and respond to its environment in order to complete a specific task.

Assuming we can get to that point, how do you think microrobots could be used in the real world? How could they improve on existing technology?

I think the applications we’re going to see first are in medicine. It’s a logical progression. We’re already using smaller and smaller medical devices and robotics for surgery; medical tools that can go further into your body with less invasiveness than other techniques, like catheters that can travel deep into your brain to treat an aneurysm or to remove a blood clot. In the future, we’ll continue to see that technology develop a little bit further, but there’s a limit on how small we can make those devices.

The next natural step will be that we put microrobots into the body that can travel into tiny spaces and treat disease at an early stage. Imagine a device that can go into your lungs to find and treat cancer before it spreads. Or treat a blood clot deep in your brain that can’t be reached with existing catheters — simple microrobots could potentially navigate to the blocked areas and help unblock them.

Those sorts of tasks sound pretty complex. Would you need some kind of artificial intelligence to do those jobs?

No, not at the moment. I mean, right now, putting artificial intelligence into a microrobot isn’t a possibility anyway. It’s just way too computationally intensive for something that small. It’d be very cool if we could, and I’m sure we could come up with some applications for it, but it’s beyond the scope of my career and likely my lifetime.

It’s important to note, though, that we may not actually need something as powerful as artificial intelligence in these cases. You can still build an incredibly useful microrobot using simple forms of intelligence and autonomous decision-making. If you have tiny devices that can recognize changes in their environment and can alter their behavior in response, they can do some surprisingly complex things. Delivering chemotherapy, for example: If a microrobot can detect pH or temperature gradients of a tumor, they can slowly move in that direction, and release a highly toxic drug directly into cancerous tissue, but not into the rest of the body.

Devices like these might only have the intelligence of a microbe but could still be incredibly effective for disease detection and drug delivery. As an engineer, I always have that objective in mind: What is the most streamlined way I can design a machine to do a certain task? It doesn’t have to be able to play chess; it just has to get the job done.

Do you imagine microrobots being used commercially in the near future? If so, how far away do you think that goal is?

Yeah, everybody wants to know the timing on that! I used to always say we were five years away. Now I’m saying three years. There’s still a lot of uncertainty to it, but the timeline is shrinking. Other folks in the field are making electronics at smaller and smaller scales, putting little transistors and things on microrobots and building circuitry directly into them. We’re starting to get the point where we can actually embed some kinds of basic computational elements directly on a microrobot.

The question is, how much computation will they ultimately need? How much onboard memory will they need? How much do you expect them to learn? With our existing technology, microrobots are going to be pretty simple for the foreseeable future.