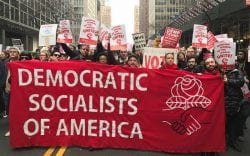 Up until the recent presidential candidate announcements, Democrats appeared extra chummy. For over two years, their anti-Trump commonality created a bandwagon wave that Democrats happily jumped on. However, with a dozen-plus candidates looking for the party’s nomination, the gloves have come off.

When the Reproductive Health Act was signed into law in New York, there was a mixture of both praise and disdain by Democrats. Oh wait no, almost all Democrats rejoiced at the prospect of women being allowed the option to kill their full-term babies, that’s right.

The topic that the Democratic Party actually seems to be divided on is socialism.

Senator Bernie Sanders, one of the most prominent self-proclaimed democratic socialists, has emerged as a top-tier candidate in the race for the Democratic Party nomination. In the 1970s, Sanders made known that he supported the nationalization of many industries and the creation of a 100 percent tax rate on anyone who makes more than $1 million.

The 77-year-old currently desires Medicare for all, increasing minimum wage significantly, creating tuition “free college”, and endorses a version of the Green New Deal. Even with his extreme left-wing views, Sanders obtained a large following when he challenged Hillary Clinton for the 2016 presidential nomination.

It seems fair to note that this socialist political player owns three homes and financial-disclosure documents show he earned over $1 million in 2016-2017 from book royalties alone. It is quite obvious he does not see a need to lead by example.

Another top Democrat and avid democratic socialist, Rep. Alexandria Ocasio-Cortez has stirred up some tension with her colleagues due to her extremist views. Ocasio-Cortez unveiled a nonsensical agenda which is being referred to as the Green New Deal. This deal comes with an estimated $94 trillion price tag and aims to retrofit or replace every building, guarantees economic security for those “unwilling to work”, and eliminate air travel options.

Senate Majority Leader, Mitch McConnel called the Democrats’ bluff about possibly supporting the ambitious deal and brought it to a vote. On March 26, the Green New Deal failed miserably by a 57-0 vote along with Ocasio-Cortez’s dream of turning America into a socialistic society where cow farts are no more.

Many Democratic presidential challengers have started to distance themselves from the socialistic blanket. “I am not a democratic socialist.” Beto O’Rourke, who appears to be a presidential campaign frontrunner, told reporters that the country can’t meet “fundamental challenges” without “harnessing the power of the market.”

House Democrat, Stephanie Murphy, made clear that she rejects the socialistic acceptance that has been associated with an ever-growing number of progressives in her own party.

She went on to describe herself as a “proud capitalist” and explained that her opposition to socialism stems from experiences in her youth while growing up in socialistic Vietnam before immigrating to America, according to the Washington Examiner.

Although the left is split over the socialism topic, many Americans, particularly young Democrats, seem to be warming to the idea.

Newhouse found, that a staggering 80 percent of “strong Democrats” believe the country would be better off politically and economically if it were increasingly more socialist.

According to a recent Public Opinions Strategy survey, 77 percent of Democrats believe that the country would be “better off” if it were more socialist, but overall a majority of voters don’t, by a margin of 51 percent to 45 percent.

It has been rare to see the left publically disagreeing on this level. Their previous art of unifying has fortified their strength as a party in the past. It is an encouraging sign that there is some dissent among the Democratic Party regarding the issue of socialism.

With so many candidates stunting for superiority, increasing potential rivalry is easily expected.

Is Socialism the Issue That Will Divide the Ever Radicalizing Democratic Party? is original content from Conservative Daily News – Where Americans go for news, current events and commentary they can trust – Conservative News Website for U.S. News, Political Cartoons and more.