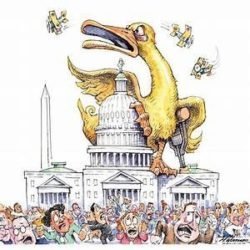 Joe Biden proclaimed that the Democrats will sweep to victory in 2022. Nancy Pelosi gushed that Joe Biden is the “perfect” man to be President today and that Kamala Harris is inspiring. Wow, what were these two smoking on Tuesday? Look at the polls, 41% and 28% for Joe and Kamala, and 33% for Nancy. These three should be looking in the mirror rather than looking to 2022. The first year of the Biden Presidency has been a disaster and the American people, including the Democrats, have no confidence in this administration and Congressional leaders. We are not going in the right direction, and there is no indication of a Biden course correction.

On Wednesday, CNN published a list of 11 Democratic candidates for President in 2024. The list is nothing but bizarre and focuses on the weak bench of the Democrat Party. Let that sink in. After less than one year, the media has already dismissed Joe Biden. Thanks, Joe, but you have served your purpose, and we are done with you. Now, move along and take Kamala with you. If, in 2024, the Democrats need to go to this list to pull a candidate, they are in a severe place and will undoubtedly lose the White House.

We all know how weak and unsuccessful the Biden administration has been in its first year. Their Domestic policies like Border Control, eliminating the Pandemic, the economy/inflation, crime, and the division of our people are all floundering. When asked during a White House presser to single out Biden’s most successful foreign policy, Jenn Psaki did not have an answer. She will have to circle back on that. Kamala Harris has been worse than anyone predicted and showed why she dropped out of the primaries before the first vote was cast. We all can also see how quickly Joe Biden is failing mentally. It is sad to watch, but he is our President makes it even worse.

The New York Times ran an editorial on Tuesday calling out the failing mental acuity of our President. If Biden is losing the liberal mainstream media, he has no allies remaining. He is alone with Dr. Jill, and it will be a very long three years until he can retire. The failure of Biden to be able to get his Build Back Better Bill over the finish line may signal his Presidency may not make it full term.

So who is on this list? There are some familiar as well as some newer names to mull. Kamala is on the list but probably just out of respect to the sitting VP. She will be nowhere near the 2024 ticket. Some ridiculous names, such as DiBlasio of New York, Murphy of New Jersey, and Whitmer of Michigan, are featured. These three have no support in their party, period. There are some unknowns that don’t matter at this time, but the two wild cards are Hillary and Stacey Abrahms. Hillary is getting paid to read the acceptance speech that she never got to read in 2016, and Abrahms will have to acknowledge she is not the Governor of Georgia finally. That leaves Mayor Pete. I don’t care who Buttigieg might run against, but it will be fun to watch him lose by the most significant vote spread in history.

To this point, President Biden has been a failure and a disappointment to both sides. In the next 30 days, he may become the quickest lame-duck President in history. That will be bad for Joe but could be devastating for the country. Nothing challenges our safety more than a President just counting the days until he moves home from the White House. I am not sure Joe will be able to count off three years.

Syndicated from Conservative View From New Hampshire with permission.