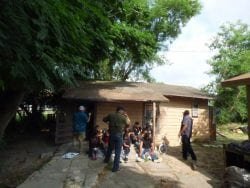 EDINBURG, Texas – Yesterday, U.S. Border Patrol agents working in collaboration with local and federal agencies disrupted three stash houses, which led to the discovery and arrest of more than 50 illegal aliens. In addition to the arrests, authorities discovered and seized drugs, guns, and ammunition.

Yesterday afternoon, a concerned citizen contacted the McAllen Border Patrol station and requested assistance. The caller stated that a relative had contacted the caller and requested help after being held in a human smuggling stash house for five days. The smuggled alien stated the stash house caretaker had provided very little food or water to the people inside. The caller provided Border Patrol the approximate location of the residence and a general description of the home. With the information provided, Border Patrol agents determined the home was located in the city of Mission.

Border Patrol requested the assistance of Homeland Security Investigations and the Texas Department of Public Safety (DPS). Upon arrival, DPS conducted a vehicle stop on a white Ford pickup after officers observed it leave the suspected stash house. Agents responded to DPS’s request for assistance to identify the driver. During the interview, the driver freely admitted to agents of being illegally present in the United States.

Shortly thereafter, authorities returned to the residence. At the home, authorities heard multiple subjects inside calling out for help. Men and women were seen at the windows and doors, but they were unable to get out due to locked burglar bars that prohibited them from exiting. Troopers and agents successfully pried the front door open with the assistance of the trapped individuals. After creating an opening, 22 illegal aliens exited the home. Upon entry into the home, agents and officers discovered several grams of cocaine, marijuana, ammunition and firearms. Agents identified the subjects to be from the countries of Mexico, Honduras, Nicaragua, Guatemala, Peru and El Salvador. None of the subjects requested medical assistance after agents and officers checked them for injuries.

Additionally, agents and officers shutdown two more stash houses that led to the discovery and arrest of 30 illegal aliens.