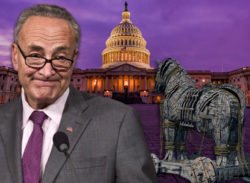 Today’s congressional Democrats aren’t even attempting to be discreet about their use of underhanded and disingenuous tactics to advance legislation they know can’t be passed through regular order.

Thursday, House Speaker Nancy Pelosi (D-CA), facilitated the passage of the highly contested voting rights legislation ahead of an expected vote in the Senate, a vote that Senate Democrats lack the votes to pass.

On Wednesday. House Democrats combined the John R. Lewis Voting Rights Advancement Act (HR4) and the Freedom to Vote Act (HR1) and disingenuously attached them (or stuffed them into shell bill) to the NASA Enhanced Use Leasing Extension Act of 2021; a bill that has zero – nothing – to do with voting rights or elections.

Since the original NASA bill was already passed by the Senate, the maneuver – similar to the deceptive advancement tactic used by former Senate Majority Leader Harry Reid (D-NV), to facilitate the passage of Obamacare – allowed the House to send the legislation to the upper chamber as a “message.” This allows for Senate Majority Leader Chuck Schumer (D-NY), to bring the bill to the floor for debate, avoiding a filibuster.

Pelosi, in remarks on the House floor and fear-mongering that the country “faces the most dangerous assault on the vote since Jim Crow,” insisted the legislation would end voter suppression, local partisan vote nullification, partisan gerrymandering, and dark money.

US Rep. Claudia Tenney (R-NY), countered Pelosi’s hollow assurances about the bills saying, “[O]ur Democratic colleagues continue to gaslight the American people by claiming that despite record turnout in recent elections, Republicans are scheming to steal the sacred right to vote from our fellow citizens.”

Tenney continued, saying the solution to the non-existent problem passionately sold to the American people is “a partisan federal takeover of elections that empowers unelected bureaucrats in Washington to oversee local elections and overturn popular voting protection laws.” Tenney called the move to facilitate Senate debate on the bills “deceitfully added to a NASA leasing authorities bill in the dead of the night.”

The sole purpose of our governments – local, state, and federal – is to serve the people; to serve the constituents. In our Republic – our Constitutional Republic, which is not a democracy – that means representing a constituency (read: the people) with fidelity.

But that is not what is happening in Washington, DC today. Fidelity to constituencies hasn’t been “a thing” for a very long time, and certainly not since President Woodrow Wilson (D), unilaterally transformed our Constitutional Republic into a nation run by the “experts” of the bureaucracy, today’s Deep State.

For several decades now, the public has made it increasingly clear – in poll after poll – that the security of Voter ID is not only an acceptable measure but one the overwhelming majority of people from all walks of life prefer. In fact, in many states laws have been enacted to require Voter ID, and contrary to what Ms. Pelosi and Mssr. Schumer contend, there has been no voter suppression.

According to a report by Yahoo! News citing a mid-2021 Monmouth University Polling Institute survey:

Yet, to listen to Pelosi, Schumer, Biden, and the rest of the far-Left fascists currently elected to office under the Democrat banner, Voter ID requirements strike fear into minority voters and serve as a throwback to the Jim Crow Era.

This disingenuous attempt to gaslight the American people about legislation created exclusively to benefit one political party – along with the litany of voter-fraud-enabling elements in HR1 and HR4, should be seen not only as unethical but, in fact, criminal.

But to the point of this story.

We must start asking why it is necessary for any – any – political party to use such devious, disingenuous, and manipulative maneuvers to move legislation if, in fact, those elected to office have fidelity to their constituents in the execution of the elected duties.

In just one point of the voting legislation debate – Voter ID (and understand that there is ample data to refute each and every point in both of those pieces of legislation) – over 25 years of polling proves that the vast, the overwhelming majority of Americans, from every political party, racial demographic, location, and level of education, supports employing Voter ID.

So, why would the elimination of a Voter ID requirement even be included in something Democrats are trying to sell as legislation to “protect” the sovereignty of the ballot?

For that matter, how are the protection of non-verifiable voting rolls, politically motivated ballot harvesting, empowering the interference of the IRS into the election sphere, or establishing a committee to effectively intimidate judges regarding their legal decision, “protecting the sovereignty” of the vote?

None of what is in HR1 and HR4 serves the best interests of the people of the United States of America. The only faction, the only people these pieces of legislation serve is the far-Left of the elected class; those drunk with entitlement and who seek to impose their will upon the total of the American people.

The US Constitution stipulates that both chambers of the Legislative Branch – the House of Representatives and the Senate – have purview over the creation of rules by which each chamber operates. Those rules and processes become convoluted and serve to promote the benefit of the political parties over the American people; become manipulative and gerrymandered when charlatans, activists, opportunists, and con-artists are elected to office, such as the overwhelming majority of those elected to office are today.

Until we – as a nation – come to understand that we need to either stop electing activists, ideologues, opportunists, and con-artists to office or move to amend the Constitution to codify procedures, limitations, and thresholds in congressional proceedings, we will have to suffer the disingenuous, manipulative, and self-serving tactics self-important professional politicians who have only the best interests of themselves and their crony benefactors in mind.

There isn’t any public service being executed at all if you have to stuff the verbiage of one bill into another bill in order to force it to a vote.

Why Calling Your Intellectual Opponents "Deniers" Is Bad for Scientific Progress