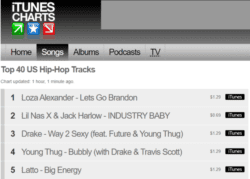 I bet Kelli Stavast wants a do-over on her Brandon Brown interview.

Watch as Kelli tries to spin the anti-Biden sentiment in her post-race interview with Brandon (chants start at 4:00):

“Let’s Go Brandon” has been used at college football games, as pranks over airport loudspeakers, tags on twitter, or in-general when anyone wants to convey their dislike for the current president without actually saying it, and now it’s a chart-topping rap song taking the #1 spot on iTunes Hip-Hop top 40.

MAGA rapper Loza Alexander originally released the meme song on TikTok in October and it immediately went viral. Now, it’s the most popular rap song on iTunes. Loza has Kelli to thank for the meme, but the message in this song is all his.