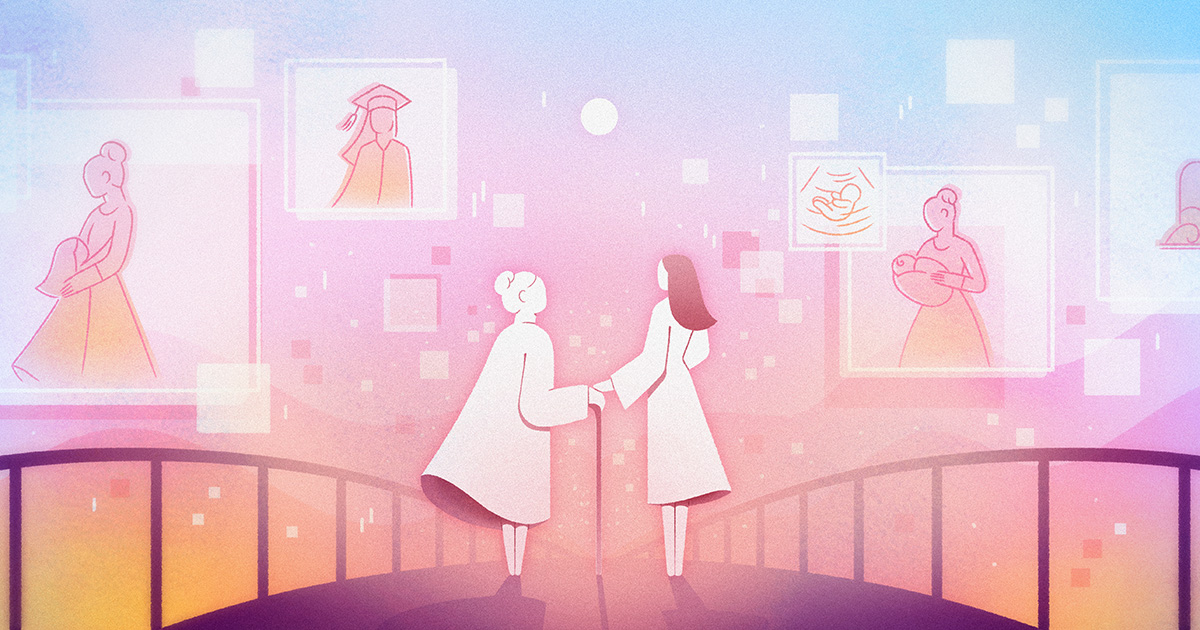 Guided conversations with the terminally ill are popular with patients, families and doctors who’ve experienced them. But are they truly beneficial? Researchers are looking beneath the anecdotal appeal.

In the mid-1990s, psychiatrist Harvey Max Chochinov and his colleagues were researching depression and anxiety in patients approaching the end of their lives when they became curious about this question: Why do some dying people wish for death and contemplate suicide while others, burdened with similar symptoms, experience serenity and a will to live right up to their last days?

Over the next decade, Chochinov’s team at the University of Manitoba in Canada developed a therapy designed to reduce depression, desire for death and suicidal thoughts at the end of life. Dignity therapy, as it is called, involves a guided conversation with a trained therapist to allow dying people to speak about the things that matter most to them. “It is a conversation that we invite people into, to allow them to say the things they would want said before they are no longer in a position to be able to say it themselves,” Chochinov says.

Dignity therapy is little known to the general public but it has captivated end-of-life researchers around the world. Studies have yet to pin down exactly what benefits it confers, but research keeps confirming one thing: Patients, families and clinicians love it.

These end-of-life conversations are important, says Deborah Carr, a sociologist at Boston University who studies well-being in the last stages of life and explored the topic in the 2019 Annual Review of Sociology. A key need of people who know they are dying is tending to relationships with people who are important to them. This includes “being able to communicate their wishes to family and ensuring that their loved ones are able to say goodbye without regret,” she says.

And the closer we get to death, the more we need to understand what our lives have amounted to, says Kenneth J. Doka, senior vice president for grief programs for Hospice Foundation of America. “As people reach the end of life, they want to look back and say, ‘My life counted. My life mattered. My life had value, had some importance,’ in whatever way they define it,” Doka says. “I think dignity therapy speaks to that need to find meaning in life and does it in a very structured and very successful way.”

Chochinov’s search to understand why some people feel despair at the end of life while others do not led him to countries like Belgium, the Netherlands and Luxembourg, where euthanasia and assisted suicide have long been legal. There he learned that the most common reason people gave for seeking assisted suicide was loss of dignity.

To learn more, Chochinov and his colleagues asked 213 terminal cancer patients to rate their sense of dignity on a seven-point scale. Nearly half reported a loss of dignity to some degree, and 7.5 percent identified loss of dignity as a significant concern. Patients in this latter group were much more likely to report pain, desire for death, anxiety and depression than those who reported little or no loss of dignity.

Dignity at the end of life means different things to different people, but in interviews with 50 terminally ill patients, Chochinov and his colleagues found that one of the most common answers related to a dying person’s perception of how they were seen by others. “Dignity is about being deserving of honor, respect or esteem,” Chochinov says. “Patients who felt a lost sense of dignity oftentimes perceived that others didn’t see them as somebody who had a continued sense of worth.”

Dignity therapy is tailored to enhance this sense of worth. In a session, a therapist — typically a clinician or social worker — carefully leads the patient through a series of nine questions (see graphic) that help a person express how their life has been worthwhile. “It’s not like a recipe, that you can just read out these nine questions and then call it dignity therapy,” Chochinov says. “We train therapists so that we can help them guide people through a very organic kind of conversation.”

The session typically lasts around an hour. About half is spent gathering biographical highlights, and the other half focuses on what Chochinov calls the “more wisdom-laden” thoughts that the patient wants to share. A few days later, the patient receives an edited draft for review. “There’s an ethos of immediacy — your words matter, you matter,” he says. “They can edit it and they can sign off on it to say, ‘That is what I want as part of my legacy.’”

But does it work?

Miguel Julião, a physician in Lisbon, Portugal, specializes in helping patients who have difficult symptoms, which is why he was asked one day a few years ago to see a patient suffering with unbearable pain. “The minute I got into his room, he told me ‘I would like you to help me die soon,’” Julião says. “I told him, ‘I don’t agree with euthanasia and I don’t do it, but I would like to know about you as a person and what you are most proud of in your life.’”

In the next few minutes, Julião learned about the man’s pride in raising “two good human beings” and stories of their life as a family. And he received an invitation to return for more conversations, which continued until the man died a month later.

The encounter prompted Julião, who was pursuing his doctorate at the time, to pivot his research and focus squarely on dignity therapy. He has had lots of company. Chochinov estimates that nearly 100 peer-reviewed research papers, and at least four in-depth analyses — “systematic reviews” of the accumulated science — have been published so far, and more studies are ongoing. The largest study yet, of 560 patients treated at six sites across the country, is now being conducted by Diana Wilkie, a nursing professor at the University of Florida, and colleagues.

Wilkie also helped conduct the first systematic review, published in 2015, which came up with a conundrum. When all studies were viewed together, the evidence that dignity therapy reduced desire for death was lacking. “The findings have been mixed,” she says. “In the smaller studies, you see benefit sometimes and sometimes not; in the larger studies, not.”

The most definitive study — Chochinov’s original clinical trial, completed by 326 adults in Canada, the United States and Australia who were expected to live six months or less — found that the therapy  did not mitigate “outright distress such as depression, desire for death or suicidality,” although it provided other benefits, including an improved quality of life and a change in how the patients’ family regarded and appreciated them. A few years later, however, Julião conducted a much smaller trial in Portugal in which dignity therapy  did reduce demoralization, desire for death, depression and anxiety.

Julião thinks that the different outcomes reflect differences in the patient groups: His study focused on people experiencing high levels of distress, while Chochinov’s did not. But Julião also notes that his study was small, with only 80 participants. “We still need more evidence,” he says. “But, on the other hand, you see a high interest among clinicians, because they see it work in daily practice.”

Positive and negative results also may depend upon how studies measure “success.” Scott Irwin, a psychiatrist at Cedars-Sinai Cancer in Los Angeles, worked at a San Diego hospice that introduced dignity therapy in 2009. “It was absolutely worthwhile — no question,” Irwin says. “Not only did the patients love it, but the nurses loved it and got to know their patients better. It was sort of a transformative experience for patients and the care team.”

Indeed, Wilkie’s literature review reported “overwhelming acceptability, rare for any medical intervention.” Patients seem to get something out of it, even if that “something” isn’t captured by measures like reduced desire for death. In  one study of 100 terminally ill patients who received dignity therapy, 91 percent reported feeling satisfied or highly satisfied; in another, 93 percent gave high ratings of satisfaction.

In Portugal, family members of dying individuals have prompted Julião to develop new uses for the therapy. He and Chochinov first adapted the interview to be appropriate for adolescents. More recently, two individuals told Julião they regretted that their loved ones had died without receiving dignity therapy, prompting the researchers to create a posthumous therapy for surviving friends and family members.

In a study of this interview protocol for survivors, “we have wonderful, wonderful comments from people saying, ‘It’s like I’m here with him or with her,’” Julião says. Doing dignity therapy posthumously could be useful in helping families deal with bereavement, he says — an idea he’d like to test.

But for all its appeal, few patients actually receive dignity therapy. Though the tool is well-known among clinicians and social workers who specialize in caring for seriously ill patients, it is not routinely available in the US, Doka says.

A primary barrier is time. The therapy session is designed to last just one hour, but in Irwin’s experience at the hospice, patients were often too tired or pain-ridden to get through the entire interview in one session. On average, a therapist met with a patient four times. And the interview then had to be edited by someone trained to create a concise narrative that is true to the patient’s perspective and sensitive in dealing with any comments that might be painful for loved ones to read.

Julião says he transcribes each patient’s interview himself and also edits it into the legacy document. The entire process typically takes about eight days; he suspects this is why he is one of only two people who provide dignity therapy in Portugal. He says he has enthusiastic responses from clinicians and social workers attending the lectures and workshops he has conducted since 2011. “But they don’t do it clinically because it’s hard for clinicians to dedicate so much time to this.”

Dignity therapy is most widely available in Winnipeg, its birthplace, where all clinicians at Cancer Care Manitoba, the organization that provides cancer services in the province, have been trained in the protocol. If a patient expresses interest, or a clinician thinks a patient might be interested, a referral is made to one of the therapists, among them Chochinov.

“And then I see them, either in their hospital bed or more typically at their home,” he says.

A few months ago, he spent about an hour with a dying woman. She told him about her proudest accomplishments and shared some guidance for her loved ones.

A few days after he delivered a transcript of the conversation, the woman thanked him by email for their discussion and for the document that “will give my family something to treasure.”

“Dignity therapy is part of the bridge from here to there, from living my life fully to what remains at the end,” she wrote. “Thank you for helping me to tell this story.”

The Case for Vaccine Mandates—Refuted

Biden Believes ‘Progress Was Made’ Towards Agreed Framework on Taxes…