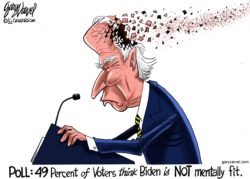 The fool in the White House said last week that a “minor incursion” of Russia invading Ukraine was nothing to worry about, so it’s logical for Americans to assume he feels the same way about our southern border being overrun by invading forces that are slowly destroying and occupying our nation.

And since Joey is the cause of America’s invasion by way of his opening our border to the world, and then sincerely insisting that the border is not open, but is more secure than Trump left it, we find that terms we have traditionally used to describe events and things, like the biological identity of sex and race which are now being ignored by woke folks in favor of their own personal self-identity, we can no longer depend on the world that Democrats describe as informing us that what’s happening around us is true. It’s like Groucho Marx asking if we’re supposed to believe the government’s interpretation of what’s occurring, or are we to believe our own two eyes.

Ukraine had better prepare itself for the vastness and viciousness of Russian power in Biden’s phase-slipped world, and Americans had better get ready for the “misery and death” Joey promised us in 2022, because now that he’s promised to be more active in 2022 than he was in 2021, the future looks grim. When Joey was safely ensconced in his Delaware basement things were going rather smoothly, but now that he is out and about, everything is going to hell, and quickly.

Joey’s allowing a “minor incursion” of America’s border by criminally opening the border to Central and South Americans has caused him to then have to break several other laws in order to avoid being caught in his first criminal act. He is providing busses and jet aircraft to transport illegal aliens throughout the nation in order to share the expense of feeding, medicating and schooling these tens of thousands of people among the several states, and a plague of Fentanyl, that is a direct bi-product of opening our southern border, is causing skyrocketing deaths across America.

Our pasty-brained, supposedly “open and transparent” president is a common crook unlike anything Richard Nixon was accused of, and he should be slapped into a prison cell immediately.

Maybe Biden Thinks The Immigrant Invasion On Our Southern Border Is Just A “Minor Incursion”. It’s Not. is posted on Conservative Daily News – Where Americans go for news, current events and commentary they can trust – Conservative News Website for U.S. News, Political Cartoons and more.

Old Man, Look At “Your” Life

How to short-circuit short-term thinking

Why Pollution Was so Much Worse in East Germany Than…