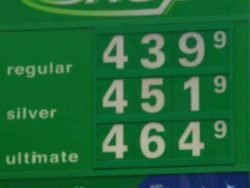 Who Knew? President Biden’s laughable attempt to lower holiday gas prices has already been thwarted by our enemies. I mean, who could see that coming – except EVERYONE on Wall Street or those of us who need a car to get to work?

But He Released a Bunch of Oil from the Reserves

Our dear leader released 50 million barrels of oil into the global economy in the hopes of containing historic energy price increases ahead of the winter heating season and holiday driving. Russia and OPEC have reacted just as Wall Street expected – they will cut production to keep prices high. You know, because it makes them money and stuff. The release equates to about 2.5 days of energy in the U.S. … yeah, thanks.

“To compensate for the new supply, Riyadh and Moscow are now considering a pause of the group’s monthly collective increase, OPEC delegates said. The U.A.E., a powerful OPEC member that has clashed with Saudi Arabia over OPEC policy in the past, and Kuwait are resisting a pause, according to the delegates.” – Wall Street Journal

That’s so weird! Our enemies are better at capitalism than our current leadership and it’s enriching them while strangling us. Who knew?

Also, those 50 million barrels will be largely released onto the world market meaning that India and China will get our cheap oil while we still get to pay OPECs prices. #Let’sGoBrandon.

Just one presidency ago, we were energy independent and didn’t give a crap what OPEC, Russia, or anyone else wanted to do. They reacted to us. What changed?

First, for those not in the know, the oil market is not based on good wishes, utopian intentions, or other unicorn-like thoughts. It works on supply and demand – pure capitalism.

If the United States starts producing a ton of energy, energy gets cheap, and other energy-sector-reliant countries produce more to keep their revenue streams going. They have no choice, it’s where their money comes from.

If the United States produces less, they produce only enough to keep the price at a point that pleases their oligarchical or monarchal masters.

Competition fixes OPEC and Trump knew it. Ceding to it does not. By producing more than Saudi Arabia we forced them to react to us. By becoming reliant on their production, they no longer care who we are or what we need. Thanks, Biden!

Releasing 2.5 days of oil from the Strategic Petroleum Reserve was a tragic mistake. It made oil slightly more available for India and China while doing nothing to relieve Americans’ pain at the pump. Did you see a reduction in gas prices this week? No? Suprising….

How did the previous administration do it?

First, they opened up huge swaths of federal land for exploration. Then they reduced regulation so that producers could quickly develop the energy on those plots. Remember what gasoline, heating oil, and propane cost just a year ago? Yeah, that’s over as long as Democrats are in power.

How will they make that dashboard in your car, rubber utensils in your kitchen, or gaming consoles for your kids without plastics?

So Why Did Biden Do It?

Simple. Political theater. His ratings are in the dump, inflation is sky-high and his team of leftist morons told him to do … anything. So he did. This won’t make a difference. There was no logic. Just hoping to grab a positive sound bite on CNN.

The Democrat agenda is flawed at best and more likely evil at its core. It is time to get back to what works and Democrats aren’t it.