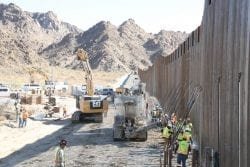 YUMA, Ariz. – The hubbub of semi-trucks, bulldozers, excavators, and the like hauling, trenching, and moving their way across the southwest border came to an end last month as the last panel of the more than 107-mile wall that spans Yuma Sector’s area of operation was erected.

Although there are still some remaining security measures to be put in place, such as adding gates, lighting, cameras, and a ground detection system, the last panel of fencing was placed on December 21, putting an end to a year-and-a-half-long effort to further secure the international border.

Work on the 18 to 30-foot-high bollard-style wall began in May of 2019 to replace existing outdated or dilapidated barriers along the border from as far west as Andrade, California, to east of Wellton. Fencing was also erected in areas where the Colorado River previously served as a natural divider.

The height of the new wall dwarfs all pre-existing fencing to serve as a deterrent to potential illegal border crossers and drug smugglers.  The new fencing also offers a clear view of the Mexican side of the border, providing additional safeguards for agents who were unable to see beyond what was once solid panel-style fencing in some areas.

“The Yuma area was an area of high illegal entries being guided by transnational criminal organizations who exploited and took advantage of our outdated and even dilapidated infrastructure,” said Special Operations Supervisor Vincent Dulesky. “Now we have this new Border Wall, combined with extra technology that will enable the Yuma Sector to maintain operational control.”

More than 107 Miles of New border Wall Complete in Yuma Sector is original content from Conservative Daily News – Where Americans go for news, current events and commentary they can trust – Conservative News Website for U.S. News, Political Cartoons and more.