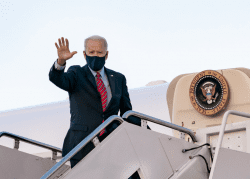 Keep an Eye on the President at Our President’s Schedule Page.

We are providing former President Donald Trump’s schedule to compare and contrast the leadership and work style of the two presidents. The schedules are from the same “day” in the administration, not the same “date”.

<note: Easter Sunday is placed on the first Sunday after the first full moon after March 21st. In 2017, Easter came a week later than it did in 2021>

The president spent Saturday morning playing golf at the Trump International Golf Club. Tax Day protesters were seen along the route to and from the golf club carrying signs demanding to see President Trump’s tax returns.

“Pay your taxes!” several people yelled as they marched toward Mar-a-Lago. “This is what democracy looks like,” some chanted, including a handful of women wearing “pussy hats” made famous during the anti-Trump protests after his inauguration.

A man held up a sign that read “Just say Nyet!” while another displayed “Twinkle Twinkle Little Czar, Putin Put You Where You Are.”

One young girl among the marchers held a small sign that read “Trump is a tax e-VADER” with an image of Darth Vader wearing a blonde hair piece.

Sunday morning began with the presidential motorcade leaving Mar-a-Lago just before 11 AM taking the president and family to Bethesda-by-the Beach Church – the same Church in which Melania and Donald married in 2005 – for Easter Sunday services. President Trump is attending church with his daughter Tiffany, son Barron, the First Lady and her parents.

After church, the president and family returned to Mar-a-Lago where they were joined by Eric and Donald Trump Jr., for the annual Easter brunch and Easter egg hunt.

The first lady released a photo of the president and herself on Sunday afternoon with the message “Happy Easter.”

Just before 4 pm, the presidential motorcade left Mar-a-Lago for Palm Beach International Airport where the president and first lady boarded Air Force one and headed to Washington, D.C.

Supporters were seen along the route to the airport with signs reading “More Winning Please” and a group of kids with signs saying “Kids <3 Trump.”

The schedule is comprised of information available from the public schedule released by the White House and several sources of publicly available information. No sensitive information is used to create this itinerary.

Kill the Filibuster, Pack the Court, Destroy Our Future