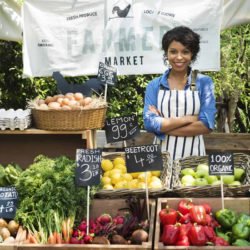 Evidently, if you are trying to start your own business through the cottage industry at Farmers Markets or are involved with a charitable food bank, you are a White-privileged White Supremisct, this courtesy of the Woke Washington State (WSU) and Duke Universities.

According to a local media report by Jason Rantz of KTTH-AM in Seattle, WSU is attempting to advance the absurd concept that farmers markets and food charities embody “white supremacy,” and perpetuate a “white dominant culture.”

Apparently, now being charitable or providing wares and food products so people can “shop local” is a matter of racism.

WSU’s agriculture program coordinator for the San Juan County Extension Ag Program promoted a webinar titled, “Examining Whiteness in Food Systems,” in which attendees were lectured about how the “white supremacy culture” creates food insecurity by “center[ing] whiteness across the food system.” It went on to propagandize that “whiteness defines foods as either good or bad.”

Zuckerman, a self-deprecating but opportunistically Woke, couched her expertise as coming from her identity as a White woman who has “benefited from whiteness for my entire life at the expense of other people.”

Attempting to sell the idea that “Whiteness permeates the food system” and that “it specifically articulates these White ideals of health and nutrition,” Zuckerman chided the “Whitened dreams of farming and gardening.”

Zuckerman took particular aim at farmers markets as being too white. She used a quote from another  Rachel Slocum, a professor of Geography at Portland State University and another self-proclaimed expert on “whiteness and food” as a jumping-off point:

“What that does is it erases the past and present of race and agriculture. What whiteness also does is ‘mobilizes funding to predominantly white organizations who then direct programming at nonwhite beneficiaries,’” she said. “And we’ll talk about that a little bit more when we talk about communities that can’t take care of themselves. Also, what this does is it creates inviting spaces for white people. Then program directors or farmers market directors are scrambling because they’re trying to add diversity to a white space. So what whiteness does is center whiteness.”

Zuckerman contradicted herself as she continued, saying the idea that “communities can’t take care of themselves” represents a “belief that low-income and or [black, indigenous, persons of color] communities and individuals – and that’s not necessarily one in the same – cannot provide or make decisions for themselves…[It] makes the assumption that they need to be helped. And these assumptions are based in negative racial and class stereotypes. And they dictate who’s given power and decision-making in food policy and programming. And then what happens, as a result, is that organizations prescribe solutions to the community without consulting them, assuming that they know better.”

That Zuckerman, with her limited understanding of grassroots entrepreneurism and charitable giving, is involved with education at any level is appalling in the boldest sense of the word. Additionally, her pathetically shallow – not to mention tunnel-visioned – application of race on the matter makes one wonder if she is intellectually challenged or handicapped.

The concept of the farmers market is to afford beginning stage entrepreneurs and artisans an intermittent, centrally-located venue to be able to bring their wares and creations so the public can engage in the purest form of Capitalism: the free market. There is no race or gender restriction on who can participate. Farmers markets don’t exclude people from entering or buying things, either. They are open to all and, in fact, those trying to make a living or supplement their incomes by engaging in farmers markets discriminate against no one at any time because that would defeat the purpose at its core.

Farmers markets are extremely beneficial to local economies even as they afford people who attend them locally produced and grown products. At every level of this concept, the existence of farmers markets benefits the local community from start to finish and the concept knows and understands no Balkanization by either race, gender, religion, or nationality, none of it.

Those who participate in farmers markets, who prepare, create, and showcase their wares, are some of the hardest working people out there. They prepare for the markets days before and are up before dawn on the days of the markets. They set up before people are out of bed and break down after people have started their Saturday night socializing, sometimes at a loss on the day.

Of course, this exhibits an entrepreneurial spirit that centers on creativity and hard work, two tenets that the ridiculous Woke culture deems “too White.”

As for Zuckerman’s understanding of the food charities, she is either completely ignorant of the concept of charity, or she is a race-baiting opportunist attempting to enrich herself as she disingenuously seeks to elevate her self-importance. Nevertheless, she outs herself as a sub-par intellect by first quoting in one direction and then propagandizing in another.

“…And we’ll talk about that a little bit more when we talk about communities that can’t take care of themselves.”

The Zuckerman makes a hard about-face to say:

“…[the idea that] communities can’t take care of themselves [represents a] belief that low-income and/or Black, indigenous, persons of color communities and individuals cannot provide or make decisions for themselves…[It] makes the assumption that they need to be helped.”

In Zuckerman’s world, if you have been taught to be caring and kind; if you have been taught that you should give of yourself to others when you realize your blessings, you simply must have a racial motive. To Zuckerman, if you are White and you give a starving Black person something to eat, you are exercising your White privilege in exhibiting your White supremacist tendencies. But if a Black person gives a starving White person something to eat that – and only that – is charity.

How does any thinking human being listen to this and not determine the speaker to be a pathetic, intellectually stunted, bald-faced racist? Everything is predicated on the color of a person’s skin and that, in the non-Woke world, is the very definition of racism!

The Woke, Fascist Left won’t stop igniting the hatred of racism until the overwhelming majority of people start calling them on and pushing back against their racism; on their attempts to divide us by race.

Just like the federal government’s unconstitutional overreach on COVID mandates (i.e. masks and vaccinations), the cancer of the Fascist-Left’s race-baiting division will not stop until we refuse to accept their concept of racism; until we refuse to accept their labeling of everything White as racist; until we defeat them using Dr. Martin Luther King, Jr’s teaching that people should be judged on the content of their character and not the color of their skin,

Using that rubric, Ms. Zuckerman is an opportunistic racist; the cancer of racism packaged as an intellect, and that cancer needs to be expunged from society.

Why are catalytic converters stolen?