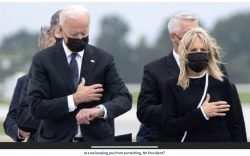 We Americans are not stupid people. We are not naive people. We resent being lied to as we have by the Biden Administration for the last few weeks. We are listening to the news sites report the end of the war in Afghanistan with the last US military transport from the airport in Kabul. We left Kabul a day ahead of schedule but admitted that we had left a couple of hundred Americans behind. This is so adverse to our creed that we never leave anyone behind. Never again will Americans go into a conflict guaranteed of returning home. That may be one of the most significant casualties of the war in Afghanistan.

There are so many veiled attempts to spin the Biden Fiasco. From Biden taking credit for finally ending a twenty-year war. To the training of the Afghan military to continue to preserve peace in Afghanistan. To finally, the “greatest airlift” in history. It was amazing to watch these spinsters spew the same talking points while downplaying the Americans and SIVs we stranded in Kabul. It did not work as the elephant remained in the room and was asked about during every briefing. These questions did not fare well with the Biden team, and answers always included a variation of “we will recover every American who wants to leave’”. That statement can be interpreted in many ways, which is precisely the design. The Biden team speaks not a word without design.

What can we expect now that the cameras are not focused on the entrance to the airport in Kabul? The administration will do all it can to let the story fade away. Unfortunately for them, that will put the attention back on the Pandemic and the Border. These are not strong points for Biden but then again, what is? The administration needs to balance the remaining Americans in Kabul and the struggle for vaccinations, and the hordes of illegal aliens flooding our border states.

The situation in Afghanistan will turn ugly pretty quickly. The Taliban, Al Qaida, ISIS-K, and maybe even the Chinese will move in soon to establish their turf. Afghanistan has a long history of civil conflicts of warring tribes. The vacuum we have left behind us will be the perfect atmosphere to continue this trend. The death and destruction that is inevitable are on our hands, on Biden’s hands.

In my mind, Biden will move quickly towards an assault on the filibuster. He needs a win and a strong one at that. He will be looking to recover his losses in the polls by pushing the Infrastructure bill and HR 1, the voting rights bill. The infrastructure is an expensive piece of legislation that has little to do with infrastructure. The Left loves big spending, and this will ensure a rebound in the numbers. HR 1 will federalize elections in conflict with the state control detailed in the Constitution.

We have a damaged administration. Biden has to get the news cycle back to domestic policy. He cannot afford any more attention to his inability to navigate foreign policy. He also needs to get Kamala Harris reengaged. She has been absent for the last few weeks, which shows her handlers fear her performance on the global front. It will be fun to watch them attempt to dig themselves out of the “black hole” that Biden defined. Let’s watch them man the shovels.

Successful Mission? NO. A Dumpster Fire is posted on Conservative Daily News – Where Americans go for news, current events and commentary they can trust – Conservative News Website for U.S. News, Political Cartoons and more.