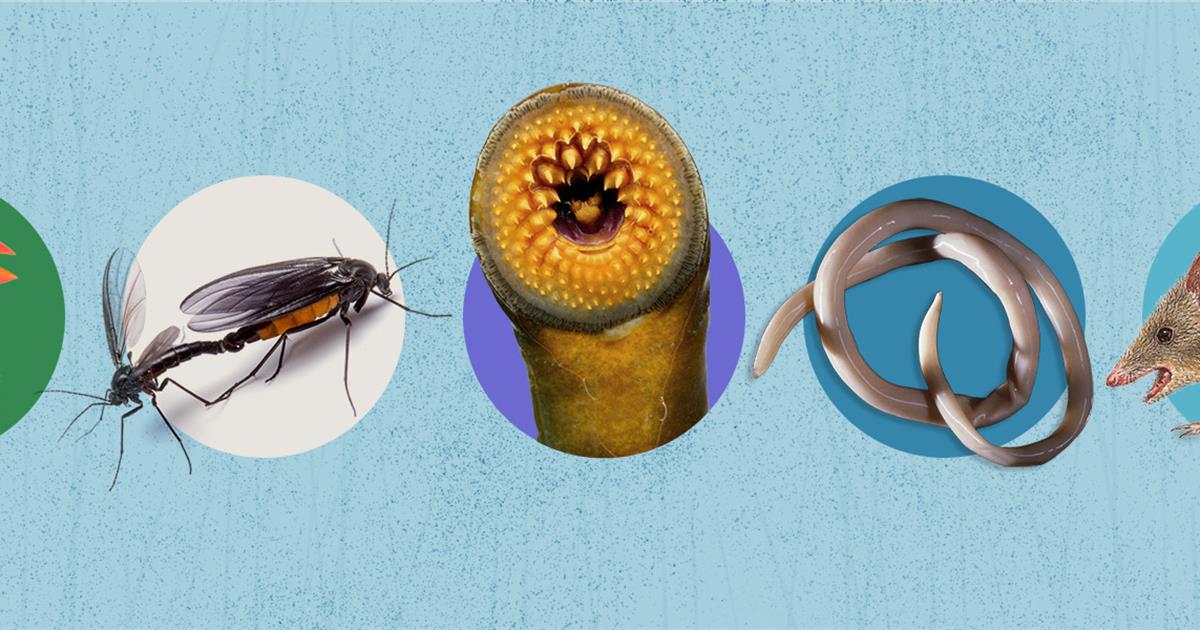 To do their lab work, Laura Ross and her team must conduct an itty-bitty surgery. First, they dissect out the reproductive tissues of the black-winged fungus gnat, a diminutive black fly about one-sixteenth to one-eighth of an inch long. Then they home in on particular cells in that tissue: the germ cells, which produce eggs and sperm and so hold the keys to the genome of the next generation.

Ross, an evolutionary biologist at the University of Edinburgh in Scotland, roots around in fungus-gnat parts because there’s something odd about the cells in these flies: They don’t follow the textbook rules. In sexually reproducing creatures, one full copy of the mother’s genetic material generally fuses with one full copy of the father’s to create the complete, doubled-up set of DNA found in cells throughout the body.

But the fungus gnat does something bizarre. Early in the embryo’s development, most of the cells jettison two specific chromosomes — enormous ones, compared with the others — so the pair never ends up in the lion’s share of the gnat’s body. Only the cells that become germ cells retain the bonus DNA and pass it on to the next generation.

How and why this feature evolved remains largely mysterious, though biologists first spotted it a century ago. And black-winged fungus gnats aren’t the only genetic screwballs. A surprisingly wide array of creatures, all the way up to some vertebrates, dump significant stretches of DNA during early development, so the stretches don’t end up in most of their body cells.

To date, scientists have observed the phenomenon in various insects, in lampreys and hagfish, in hairy one-celled life forms called ciliates, in parasitic roundworms and tiny crustaceans called copepods. They’ve seen it in rat-like marsupials called bandicoots and in songbirds — probably all songbirds, according to recent work. And they expect to find many more cases.

“A lot of these weird genomic features tend to be fairly rare, but they do evolve repeatedly,” Ross says. “It’s not just one freak event.” Presumably, then, there must be some selective advantage to the creatures that go down that evolutionary route. But what is it?

Beyond their fascinating oddness, these quirks may hold broader lessons on how genomes work the way they do, scientists think, and how and why the DNA in germ cells is treated differently from the DNA in the rest of the developing critter’s body.

“It’s a fundamental difference between the DNA that’s going on to the next generation and the DNA that’s in all the other cell types,” says Jeramiah Smith, a geneticist at the University of Kentucky who studies the phenomenon in lampreys and described it in the 2020 Annual Review of Animal Biosciences.

A case of less is more

Starting in the late 1800s, well before scientists nailed down the link between DNA and heredity, biologists peering down microscopes used dyes to study tiny, twig-like bodies inside dividing cells, watching as the twigs grouped together and then separated. German anatomist Wilhelm von Waldeyer-Hartz named these structures chromosomes in 1888, for the ease with which they took up dye.

Around the same time, cell biologists observed chunks of chromosomes being discarded in a parasitic roundworm called Parascaris univalens that infects horses — a much-studied worm because its pair of huge chromosomes were easy to view under a microscope. In later decades, researchers described other worm species that dropped segments from several chromosomes during early rounds of cell division in embryos. “But they didn’t have the technology to really explore it,” says Richard Davis, an emeritus molecular biologist at the University of Colorado School of Medicine in Aurora.

Davis, who dedicated the last decade of his career to studying how this casting-off happens in a handful of roundworms, initially thought that the DNA being eliminated carried no blueprint for any genes. Most biologists (those who’ve heard of the phenomenon, anyway) have assumed the same thing, he says.

It turned out, though, that this ditched DNA contains genes — lots of them. Roundworms from the genus Ascaris, which infect pigs and people, dump about 5 percent of their genes, while those of the genus Parascaris cast off about 10 percent. Only the cells that are destined to form the worm’s body do the DNA ditching: Just like the black-winged fungus gnat, the full set of genes remain in the cells destined to form eggs and sperm. The worm’s offspring, and its offspring’s offspring, repeat the exact same process.

Davis also noticed something else: Most of the genes that are retained in the germ cells are active in those cells, implying they’re needed there. And so Davis thinks that tossing the genes away in all the other body cells may be the worms’ ironclad method of making sure the genes don’t become active where they aren’t meant to.

Guaranteeing that genes are active at certain times but not others, or in some tissues but not others, is a critical function for any living thing. Think of the many different cell types in our bodies: All contain the same DNA sequence, but our heart cells produce different proteins than our skin cells do, so that each can do its specialized job. And even within a particular type of cell, the proteins that are produced vary during a creature’s lifespan.

Perhaps what these dropped genes do would be so damaging to adult cells that eliminating them is a better-safe-than-sorry device, Davis says. “It’s total speculation, though — because there’s no proof of anything.”

But that also presents a puzzler that’s yet to be solved. Most living things already have ways to silence specific genes by adding chemical tags. “So why do they choose to do this?” Davis says.

Jawless fishes do it too!

Smith thinks the same type of extreme gene silencing may be at play in lampreys. His lab stumbled upon DNA elimination in these ancient jawless fish while working with colleagues on decoding the lamprey genome. Smith had seen research from the 1980s reporting  chromosome loss in the closely related hagfish. He decided to see if lampreys were doing the same thing.

Lamprey physiology makes it easy to extract eggs and sperm from the animals — Smith likens it to milking a cow or squeezing toothpaste out of a tube. He then fertilized the eggs and watched the embryos develop and found that they were dropping chromosomes 1.5 to 3 days after fertilization.

Lampreys lose 12 entire chromosomes out of their initial set of 96, and perhaps some bits and pieces from the chromosomes that remain. The losses are pre-programmed to occur in almost all the cells of the embryo except for a small handful of cells destined to soon become germ cells. Ultimately, those bits end up in sperm and egg cells, but not in any other lamprey cells.

Using advanced sequencing methods that were just coming online at the time, Smith and his colleagues identified many genes in the eliminated DNA. Intriguingly, about 60 percent to 70 percent of the genes are similar to ones that, in our species, are thought to boost cancer when their activity gets out of control. Whatever their normal function is, those genes might be especially dangerous ones to keep around in body cells. “We think lamprey are getting rid of these genes as a means of permanently silencing them,” Smith says.

A whole extra genome in gnats

Ross’s fungus gnats, Bradysia ( Sciara)  coprophila, have their own special mystery. They have been bred and maintained for decades, passing from lab to lab. Researchers in the 1920s studying how chromosomes behave in the cell noticed that these flies lose two chromosomes in some cells. (Some insects, it’s now known, have more than 80 chromosomes to dispose of.) But these chromosomes — called germline restricted chromosomes because they are only retained in the germline — are almost as large as the rest of the gnat’s genome.

In fact, they are basically an entire genome, as they contain an entire extra set of the genes a gnat has. But fungus gnats are weirder still. When Ross and her team sequenced the chromosomes, she found that the genes they bear aren’t especially similar to ones of the species they reside in. “It looks like the genome of a completely different species,” Ross says — of an entirely different group of flies.

Ross’s best guess is that during a rare mating event between two different species eons ago, the genome of one got integrated into the genome of the other and somehow got shunted to the germline alone. For her, this still-hypothetical freak event — along with other weirdnesses over how flies pass on their genetic material — points to a fundamental mystery. “The definition of life is being able to copy and paste your genetic material into future generations,” she says. “Why is this process so variable, and what drives that variation?”

That same question drives Alexander Suh, an evolutionary biologist at the University of East Anglia in the UK and Upsala University in Sweden, who studies a germline-restricted chromosome in the zebra finch, a songbird. Researchers first reported its existence in 1998. As a zebra finch embryo develops, this chromosome “somehow ‘magically,’” says Suh, “and I say that with quotes just because I have no explanation yet,” gets dropped from all cells except the germ cells.

This bizarre chromosome, too, is chock-full of genes, many of them present in multiple — sometimes hundreds of — copies. And many are active in the germline. Suh and colleagues and  another group independently reported in 2019 that the chromosome dates back to the common ancestor of songbirds, and that all songbirds — about half of all birds — carry it.

“Whatever it is, it’s been around for 50 million years,” Suh says. “It’s somehow made sure that the host cannot exist without it.”

Why do they do it?

Now Suh’s team and others are puzzling out the possible role of this chromosome by looking at the function of the genes it contains. In the zebra finch at least, many of them seem related to development of the female gonad. Others appear to be involved in other aspects of early development.

But it’s a head scratcher, Suh says, why these genes get passed down in a roundabout way that differs from the standard system of heredity. Smith, Ross and Davis are similarly pondering the reasons for the systems that they study in lampreys, flies and worms.

Perhaps the chromosomes (or bits of chromosomes) are “selfish” — just in it for themselves — and have engineered ways to be retained. Or maybe these germline-restricted chromosomes have a benefit — for example, by serving as “incubators” where newly evolved genes are safely housed until it can be determined if they’re beneficial or damaging to the organism.

Alternatively, the processes could be holdovers from earlier evolutionary events. Maybe, says Smith, this silencing technique evolved before or in parallel with some of the silencing methods that vertebrates use today. “Is this something that at one period of time defined our ancestors’ biology?”

But whatever the answer — or answers — turns out to be, it’s striking, Suh says, how few people, even among biologists, are aware that genes and heredity so often work in peculiar ways.

“Maybe,” he says, “this is something we need to start teaching earlier on: how even more fascinating the genome is than we already thought.”