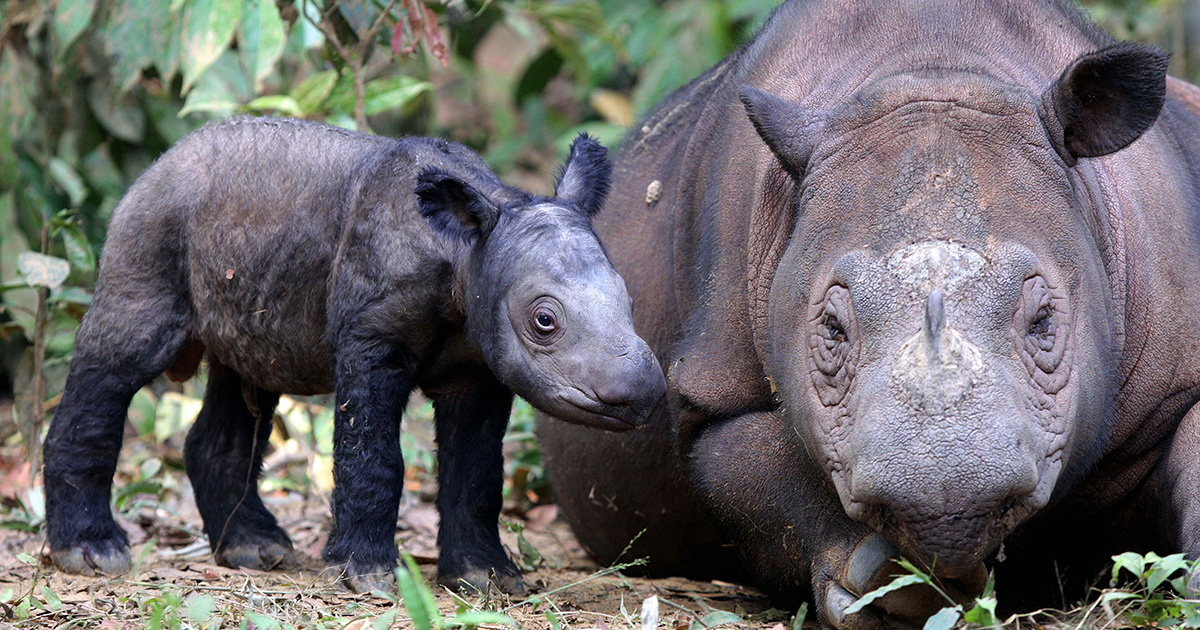 If we’re truly serious about protecting animal species from extinction, we should learn more about how they reproduce

The endangered Sumatran rhino is on the brink of extinction, and some of the few remaining animals are too stressed or damaged to get pregnant at all. Conservation workers are trying hard to use breeding programs to save them. But it might already be too late.

The world is currently in the midst of a major extinction event because of human activities like deforestation and pollution. Many animal populations have become too small, dispersed and incapable of reproducing fast enough to remain sustainable. This is sad, and it can have plenty of knock-on effects — having a wide diversity of species on the planet helps to give people the air, water, food, medicine and energy we need to thrive.

There is no single answer to this problem. A lot of work is focused on protecting habitats to save biodiversity — like the late biologist E.O. Wilson’s Half-Earth Project. Such work is vital. But it is just as urgent that we learn more about the biology of how these animals make babies. Unfortunately, far less money is spent on wildlife reproductive science than on ecosystem protection.

As a research veterinarian with 25 years of experience working in wildlife reproduction, I have seen first-hand in conservation breeding facilities how complicated and difficult successful sex can be for many animals. Even at the peak of the breeding season, clouded leopards can severely injure each other instead of making babies if there is no chemistry in the couple. Some frog species will not be able to reproduce if there is just a slight change of temperature or humidity in their environment.

We cannot help these animals if we do not know enough about how they reproduce. Surprisingly, researchers understand extremely little about wildlife reproduction: Less than 5 percent of mammal species have had their reproduction characterized at the cellular and hormonal levels. The number is even lower for non-mammalian species. This is a comical lack of knowledge.

Understanding reproductive biology is extremely valuable — both for rescuing small populations through assisted breeding, and also for working out what’s going wrong in natural populations that are struggling to reproduce in the wild. Often the problem is that small population numbers have led to inbreeding, or made it so that potential mates cannot even find each other. Other times the problems are more subtle.

Fertility depends on animals’ diets, hormone levels, stress levels and more. Examining fecal samples has shown that lions and whales can be stressed out by human encounters, for example, which could affect their ability to have children. In many animals (including humans), a poor diet for a pregnant mother can affect the health of her offspring, creating a long-term effect on reproduction that spans generations. In one particularly interesting case, researchers in the early 2000s realized that their efforts to give extra food to an endangered wild New Zealand parrot, the kakapo, was having the undesirable effect of skewing the chicks towards males.

Ramping up our understanding of reproductive biology is daunting. It can be hard even just to collect sperm — many wild animals need to be sedated to get samples; getting sperm from frogs requires the right injection of hormones, which vary from species to species. Freezing samples is also very tricky, as protocols have to be species-specific. It has proven difficult or impossible to freeze the eggs of fish, reptiles and birds.

There are some vitally important biobanks that freeze and store sperm, eggs, embryos and reproductive tissues (similar to seed banks), including one at the Smithsonian Institution. But I estimate they cover less than 1 percent of the 5 million to 10 million species on the planet.

There is so much to study. In-vitro fertilization (IVF), for example, is highly sensitive to temperature, pH, and the culture media or materials used to grow cells in the laboratory: We now know that IVF needs to be done at 39 degrees Celsius for ruminants, 38.5 degrees for cats and 37 degrees for rodents, with close to zero tolerance for temperature variation. Years of hard work has identified one particular protein from oviducts that helps to stabilize sperm from sheep, cattle, pigs and the Iberian brown bear; there are surely plenty more yet to be discovered.

There are some success stories, where decades of hard work, including in reproductive science, have resulted in successful breeding programs. Giant panda numbers, for example, have gone up from around 150 in the early 2000s to more than 600 in captivity today. Black-footed ferrets went from just 18 individuals rescued in the 1980s to hundreds raised in captivity and reintroduced to the wild, thanks in part to artificial insemination with fresh or frozen sperm samples. But we need a lot more knowledge to achieve similar results for other species.

We also need to move fast. Ideally, we should study reproductive biology in animal species before they become too rare.  The last-minute efforts to save a few remaining rhinos through assisted reproduction are commendable but they should have started many years ago.

Of course, many things need to happen together. There is little point breeding endangered species if there is no knowledge about how to successfully reintroduce them into the wild, or no wild space to introduce them to. Likewise, there’s little point conserving habitats if animals are facing threats to their reproduction, like environmental toxins or the impacts of climate change on food availability. A crucial — and sorely neglected — part of the solution must be studying reproductive biology, so we can unravel how and why species are thriving or struggling, and how best to help them — before it’s too late.

An earlier version of this article appeared first in The New York Daily News .

Pierre Comizzoli is a research biologist at the Smithsonian’s National Zoo and Conservation Biology Institute in Washington, DC.