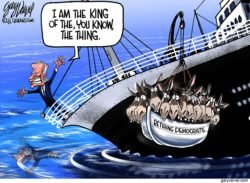 Even though Joey’s attempt to mandate that every employer having more than 100 employees be forced to fire non-vaccinated employees, especially large companies that have contracts with the government or who have products that can be regulated or ended at the pleasure of the government, was slapped down by the Supreme Court, most of his unconstitutional firings will happen anyway. Big companies in particular understand the vicious nature of leftist politicians, and they will bend over backwards to please today’s far-left Democrats.

So there is no chance that the Supreme Court ruling against Biden will halt mass firings of non-vaxed employees in private industry. Anyone doing business in America fears the IRS, OSHA, wokeism, unbridled government intrusion and a whole platoon of regulators who are only too willing to do the bidding of a power-hungry president.

Conversely, when Trump was in office he was kind, supportive and considerate of business interests and their attempts to make a profit, and backed off on punitive regulations that negatively impacted their operations. But he nevertheless got little respect from business leaders because CEOs knew that Democrats would regain power eventually, so with government ruthlessness in mind and as the economy continued to grow under Trump, they still toed-the-line to Democrat demands and even expectations of government demands that haven’t been made yet.

With the constant threat of Democrat woke rules dominating government, there’s no way things will get better, especially with a fool like Joey in the White House. With vicious, radical Democrats in charge of our government, our constitution and our way of life are at risk. As long as big companies know what politically correct things corrupt Democrats want done, they’ll jump through hoops to get the leftist deeds accomplished, often without having to be told what to do.

The Supreme Court Blocked Biden’s Mandates, But Joey Will Still Win That Battle is posted on Conservative Daily News – Where Americans go for news, current events and commentary they can trust – Conservative News Website for U.S. News, Political Cartoons and more.

More Than 200,000 Without Power as Winter Storm Slams the Southeast