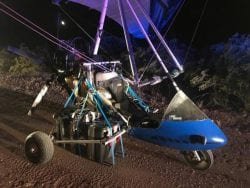 Agents encountered the aircraft abandoned along a rural dirt road, with two large plastic storage containers affixed to the fuselage. Canine units on scene inspected the aircraft and discovered numerous methamphetamine packages inside the containers.

The drugs and aircraft were seized and transported to the Nogales Border Patrol Station, where testing confirmed the packages contained over 143lbs of meth and over 200 grams of fentanyl.

An AMO helicopter crew and Border Patrol agents conducted an exhaustive search of the area, but did not find the presumed pilot.