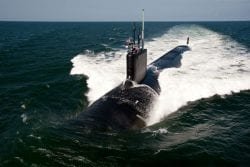 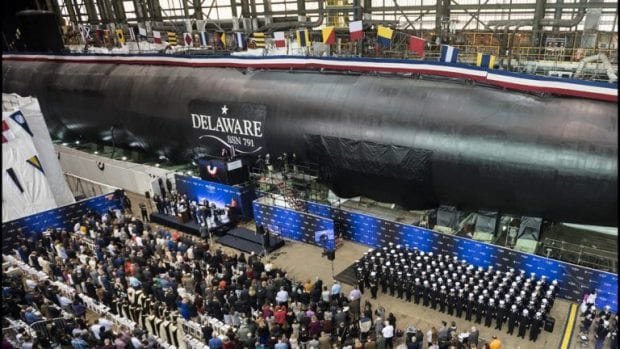 Christening of the Delaware held in October of 2019 (Photo Credit: Matt Hildreth/The Hill)

Although the traditional public commissioning ceremony was canceled due to public health safety and restrictions of large public gatherings, the Navy commissioned USS Delaware administratively and transitioned the ship to normal operations. Meanwhile, the Navy is looking at a future opportunity to commemorate the special event with the ship’s sponsor, crew and commissioning committee.

“This Virginia-class fast-attack submarine will continue the proud naval legacy of the state of Delaware and the ships that have borne her name,” said Acting Secretary of the Navy Thomas B. Modly. “I am confident that the crew of this cutting edge platform will carry on this tradition, confronting the many challenges of today’s complex world with the professionalism and agility the American people depend on from the warriors of the silent service.”

Vice Adm. Daryl Caudle, commander, Submarine Forces, said he is pleased to welcome the ship to the U.S. submarine fleet and contribute to its unmatched undersea warfighting superiority.

“The U.S. Navy values the support of all those who contributed to today’s momentous milestone and will look for a future opportunity to commemorate this special event,” Caudle said. “The sailors of USS Delaware hail from every corner of the nation and from every walk of life. This crew, and the crews who follow, will rise to every challenge with unmatched bravery and perseverance to ensure the U.S. Submarine Force remains the best in the world.”

The ship’s sponsor, Dr. Jill Biden, offered congratulations to everyone who played a role in delivering USS Delaware to service.

“I know this submarine and her crew of courageous sailors will carry the steadfast strength of my home state wherever they go,” she said. “The sailors who fill this ship are the very best of the Navy, and as you embark on your many journeys, please know that you and those whom you love are in my thoughts.”

Delaware’s commanding officer, Cmdr. Matthew Horton said today marks the culmination of six years of hard work by the men and women who constructed the submarine and are preparing her to become a warship. He said he is especially thankful to the crew and their families, Dr. Biden, the USS Delaware Commissioning Committee and the Navy League of Hampton Roads for all their hard work and support.

“As we do our part to maintain the nation’s undersea supremacy well into the future, today marks a milestone for the sailors who serve aboard USS Delaware. Whether they have been here for her initial manning three years ago, or have just reported, they all are strong, capable submariners ready to sail the nation’s newest warship into harm’s way,” Horton said. “I am equally proud of the families who have stood by through the long hours of shift work, testing, and sea trials and supported our mission with patriotism and devotion.”

This is the first time in nearly 100 years the name “Delaware” has been used for a U.S. Navy vessel. It is the seventh U.S. Navy ship, and the first submarine, to bear the name of the state of Delaware.  Delaware is a flexible, multi-mission platform designed to carry out the seven core competencies of the submarine force: anti-submarine warfare; anti-surface warfare; delivery of special operations forces; strike warfare; irregular warfare; intelligence, surveillance and reconnaissance; and mine warfare.

The submarine is 377 feet long, has a 34-foot beam, and will be able to dive to depths greater than 800 feet and operate at speeds in excess of 25 knots submerged. It will operate for over 30 years without ever refueling. Delaware’s keel was laid on April 30, 2016, and was christened during a ceremony Oct. 20, 2018. It is the final Block III Virginia-class submarine, before the next wave of Block IV deliveries.

Blood of Aborted Babies on Hands of Non-Voting Christians