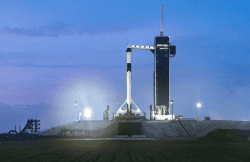 Private space company SpaceX is hoping to send 3 civilian astronauts into orbit around the Earth on Wednesday.

The astronauts are aboard a Dragon capsule named “Inspiration 4” in which they will ascend to an altitude of 575 km – further from Earth than even the International Space Station.

The launch window starts at 8:02 p.m. EDT and lasts approximately five hours during which the Falcon 9 rocket carrying Inspiration 4 to space could launch at any moment when conditions are right.

The long launch window comes as this capsule has no intention of docking with the ISS which would require an instantaneous launch in order to approach the station efficiently.

The crew is the first all-civilian crew to orbit the Earth.

The astronauts will be in orbit for approximately three days during which they will perform science experiments.