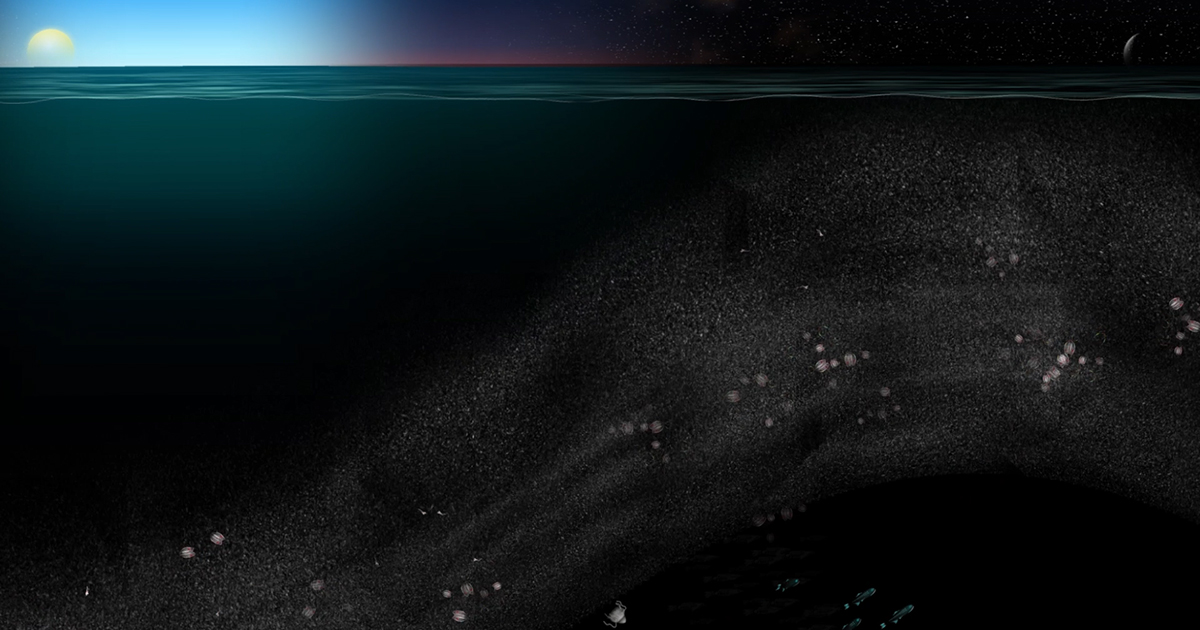 Many water dwellers – from plankton to large fish – commute daily from the depths to the surface. Researchers are starting to shed light on this still poorly understood phenomenon.

Every evening, after twilight gives way to dark, hordes of marine creatures — from tiny zooplankton to hulking sharks — rise from the deep to spend the night near the surface. They revel in the upper waters, feeding and mating, before retreating back down before dawn.

Known as the diel vertical migration, this mass movement is often heralded as the largest synchronous migration on Earth. As the planet spins on its axis and patches of ocean turn toward or away from the sun’s light, it happens in continual flux around the world.

The migration was first documented in the early 1800s, when naturalist Georges Cuvier noted that plankton called daphnia — water fleas — were disappearing and reappearing in a daily cycle in a shallow freshwater lake. Then, during World War II, came the discovery of the “deep scattering layer”: a zone in the oceans that unexpectedly deflected pings of Navy sonar and mysteriously disappeared each night, like a phantom seabed.

Scripps Institution of Oceanography scientist Martin Johnson proposed an explanation: The deep scattering layer could be marine animals migrating up to the surface. In June of 1945, he tested the idea on an overnight excursion in the waters off Point Loma, California. The zooplankton, jellyfish and various crustaceans he caught in a series of 14 hauls established that the moving layer was indeed made up of living creatures undertaking an evening migration.

But despite its pervasiveness, puzzles remain. Research suggests that changes in light trigger the evening trek, so it’s unclear how animals in waters around the Earth’s poles — where there are months when sunlight is constant or completely absent — know when it’s time to migrate. Researchers are working to understand this, as well as nailing down when various creatures make their journeys — and why some choose not to travel at all.

Understanding these nuances is important, scientists say, because the diel vertical migration serves as a giant conveyor belt transporting carbon that is nibbled in surface waters down into the deep — carbon that might otherwise just linger at the ocean surface or return to the atmosphere. It’s a costly habit: Estimates suggest that over a year, the collective energy spent commuting by zooplankton alone is equal to about a year’s worth of energy consumption in the United States.

Diel migration by the light of the moon

There’s a consensus among scientists that for many creatures, including zooplankton like daphnia, the migration helps them avoid being eaten. Deeper, dark waters provide refuge from the eyes of predators during the day. Visits to the surface, where food lies in greater abundance, are most safely done under cover of night.

Scientists also agree that changing light intensity is the primary environmental cue for migrators, says Heather Bracken-Grissom, a marine biologist at Florida International University. When light starts to fade, that can trigger the ascent to the surface.

But that’s not the whole story. Scientists had long assumed, under the light-following model, that daily migrations would cease during the Arctic winters, when there are months without daylight.

But in 2008, researchers reported that zooplankton were, indeed, partaking of an evening migration in Arctic waters off Svalbard during the long polar night. More recent research has established that this pattern is widespread — and can be driven by moonlight. Reporting in 2016, a team of scientists from Norway and Great Britain surveyed waters around the Arctic in the months before and after the winter solstice, when the sun is always below the horizon. Using hydroacoustic sampling techniques, the team discovered that the tiny marine creatures had shifted their migrations,  syncing them with the light of the moon rather than that of the sun. And in addition to the daily cycle there was a monthly signal: The animals were regularly moving to deeper waters during the bright light of the full moon.

Scientists are also learning more about the supreme sensitivity of zooplankton to changes in light. Working in the northern Pacific Ocean, a team used sonar-like acoustic sampling to detect the daily movement of critters including copepods, ostracods, salps and krill. The recorded weather was consistently overcast, gray and drizzly, but the zooplankton could still detect variations in the thickness of cloud cover and adjust their depth, the team reported in  PNAS in August. A difference in brightness of only 10 to 20 percent was enough to prompt mini-migrations of 50 feet — no small trek for the tiny animals.

The constant daylight of a polar summer ­also doesn’t seem to stop zooplankton from their nightly pilgrimage. Over several years in the waters off the western Antarctic coast, researchers used specialized nets that collected samples at specific depths. Examining the contents, the team found that the critters kept up their migration throughout the constant light of summer, although for some, the commutes were shorter when the days were longer.

The fact that the tiny marine animals conserved their daily cycle even without the dark suggests that some other signal triggers their migration, either independently or in combination with light — perhaps an internal circadian clock, says study coauthor Patricia Thibodeau, a plankton ecologist at the University of Rhode Island. Through genetic studies and lab and field experiments, scientists recently established that such a clock does guide the daily cycles of some migrators, including the copepod  Calanus finmarchicus and the Antarctic krill  Euphausia superba.

The research suggests that since the stakes are so high — migrate or be eaten — evolution favored development of an internal circadian cycle for diel migration, as a backup to reliance on environmental cues.

Predators may influence the decision to migrate

The high stakes around daily migration also seems to shape how creatures behave during their commute. Research has found that migrators off Santa Catalina Island in California tend to stick together in coherent groups or schools as they travel, which may reduce the risk of being eaten. Larger, more conspicuous animals such as fish migrate later — roughly 80 minutes after sunset — than smaller, less visible animals, which begin their migration up to 20 minutes before sunset.

The presence of predators also prompts some migrators to delay their trek. When squid-eating Risso’s dolphins, for example, were in the area, researchers observed that squid waited in deeper waters, postponing their journey by roughly 40 minutes.

And some individuals, on some days, appear to skip the commute entirely. Researchers suspect that they might not always be hungry enough to feel the journey is worth the risk. This idea, known as the “hunger/satiation hypothesis,” posits that individuals in a population are motivated by their own hunger levels.

A team including Nova Southeastern University marine ecologist Tracey Sutton put this theory to the test, taking advantage of trawl surveys in the Gulf of Mexico following the Deepwater Horizon oil spill. Over a span of seven years, automated net systems collected specimens from sampling stations across the gulf, in both deep and surface waters. Of those, 588 critters were then sent to labs, so the team could “crack open their stomachs and see what they eat,” says Sutton, who coauthored an overview of deep ocean food webs in the 2017  Annual Review of Marine Science.

The scientists found that those that didn’t migrate still had food in their stomachs, suggesting they chose not to make the trek because they were still satiated from the previous night. And migratory individuals were more likely to have emptier stomachs. But exceptions remained — one fish and two crustacean species didn’t follow that pattern, suggesting that individuals within a population “choose” whether or not to migrate, the researchers reported in February in  Frontiers in Marine Science. The species of fish whose migration patterns didn’t align also had shallower migrations, and may have a faster metabolism than other species — variables that may interplay, Sutton says, making it difficult to draw any universal conclusions.

Hunger, light, genetics and more — scientists are continuing to probe these and other factors that affect this great commute, including salinity, temperature and exposure to UV light. Studying these variables, along with which animals are moving when and who is eating who, is key to understanding the Earth’s carbon cycle, says Sutton, and how this massive commute helps sequester it over time.

The migration, he says, “is more or less everything, if you’re really tracking carbon.”

In a Hot M&A Market, Not All Combinations Are Winners

“What Jackass Thought This Was a Good Idea?” A Response to the DCCC