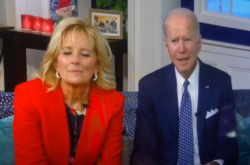 President Biden’s first year was a terrible, no good, very bad year and the White House’s answer is to take a mulligan on their communications strategy, according to an NBC News report.

Officials quoted by NBC said that details of Biden’s negotiations with members of Congress would no longer be made public. A move out-of-synch with his pledge to lead “the most transparent administration in history.” The tactic is likely an attempt to hide Biden’s lack of political leadership as previous attempts to strong-arm members of both parties have shown him to be weak and disregarded.

The White House is reportedly also seeking to get the president talking more directly to the American people, a majority of whom find him unfit for office and the country on the wrong track.

“There is a recognition that we need to change that dynamic,” a senior administration official told NBC.

A shift to more direct communication with the American people could be difficult. White House staff is unable to agree upon just how to do that and Biden is not an artful or effective communicator – something he demonstrated regularly in his first year. Who could forget the live television spot where Biden infamously exclaimed “That’s right! Let’s go Brandon!”

Apparently, some White House staffers think that Biden’s problem is similar to Vice President Harris’ – He just needs to get out of D.C. more:

“What some of Biden’s aides have expressed concern about most is the impression that he is seemingly bogged down at the White House, giving too many “one-dimensional” speeches from Washington instead of showcasing what they see as his greatest political strength: empathy and an ability to connect with ordinary Americans.”

“Oftentimes in modern history when a president has frustrations and drops in the polls, the president will say, ‘It’s now time for me to talk over the heads of the elites and talk directly to the people to convince them that what I’m trying to do is right,’” presidential historian Michael Beschloss said.

The struggle for the president is that the ‘accomplishments’ his administration is touting are out-of-touch with American families. He’s solving problems they don’t have and promising things they can not relate to.

“The country is not experiencing a jobs crisis, America is feeling the pressure of a labor crisis. Promising a bazillion new jobs isn’t going to ring true in this economy. The jobs are already there, it’s the workers that are missing.

Do you think Ma and Pa are sitting around the table wondering why the president hasn’t put up more power lines in their area? Are little Jimmy and Susie losing sleep at night because the government isn’t building a high-voltage transmission line near them? The answer is no.”

Will traveling across the country delivering more speeches fix the poll numbers? Likely not, but the stories that come out of a nationwide Biden road-show will likely write themselves.