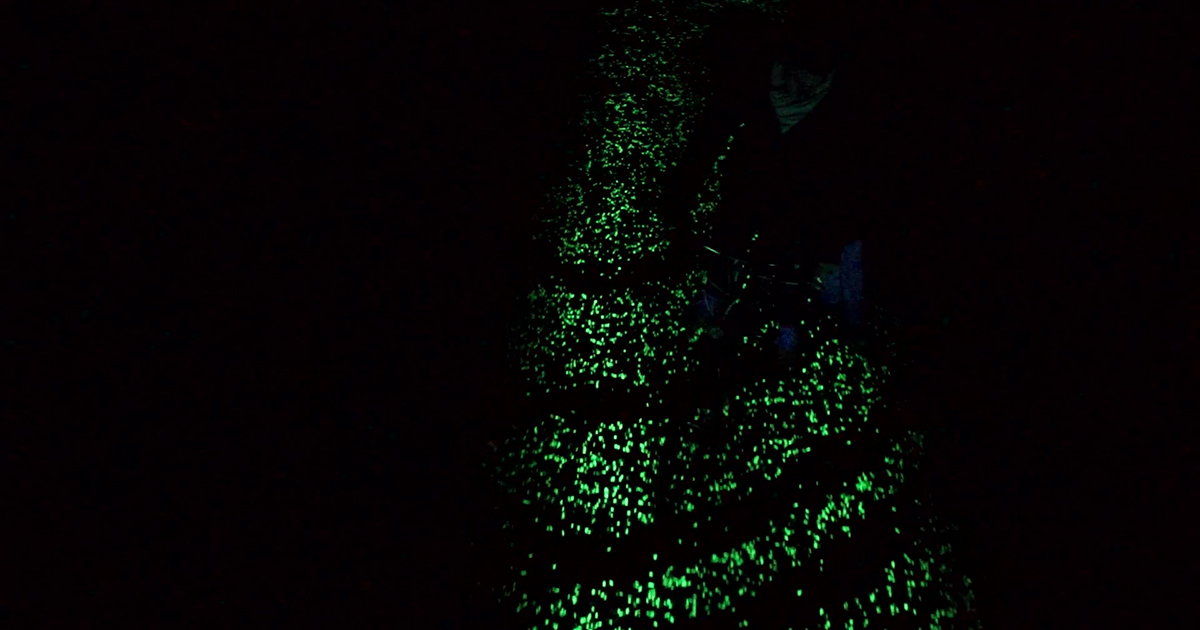 Substances that persistently luminesce are already used in some bike lanes, and in the future could be applied to sidewalks, streets and buildings — saving energy and reducing urban heat

Around the year 1603, Italian shoemaker and amateur alchemist Vincenzo Casciarolo tried smelting some especially dense stone he had found on the slopes of Mount Paderno, near Bologna. No gold, silver or other precious metals resulted as he had hoped. But after the stone had cooled, Casciarolo discovered something interesting: If he exposed the material to sunlight and then took it into a dark room, the stone would glow.

That “Bologna Stone” was the first artificially prepared, persistently luminescent substance. Many more were to follow — and today, persistent luminescent materials are used for decorations, emergency lighting, pavement markings and medical imaging.

Someday they might give us glowing cities that stay cooler and use less electricity.

A new generation of luminescent materials has the potential to cool cities by re-emitting light that would otherwise be converted into heat. They might also cut down on energy use, since luminescent sidewalks, glowing road markers or even glowing buildings could replace some street lighting. Already, some cities in Europe have installed glowing bicycle lanes, and some researchers have studied using  glowing paint for road markings.

“It’s better for the environment,” says Paul Berdahl, an environmental physicist now retired from Lawrence Berkeley National Laboratory in Berkeley, California. “If the technology can be improved, we can use less energy.… It’s a worthwhile thing to do.”

The Bologna Stone, a form of the mineral baryte, fascinated natural philosophers at the time, but was never especially useful. But in the 1990s, chemists developed new types of persistent photoluminescent materials, such as strontium aluminate, that maintained a strong glow for hours after exposure to light. Most of these new materials give off a blue or green glow, although a few glow yellow, red or orange.

Such photoluminescent materials work by “trapping” the energy of a photon and then re-emitting that energy as lower-wavelength light. Sometimes the light is emitted immediately, such as in a fluorescent light bulb. Other materials, which are called persistently luminescent, store the energy longer and emit it more slowly.

These materials that glow strongly for hours open possibilities, such as “glow-in-the-dark” cities lighted by luminescent pavements and buildings. Since 19 percent of all global energy use is for lighting, and in Europe  about 1.6 percent specifically for street lighting, the potential energy savings are large, write building engineer Anna Laura Pisello and colleagues  in the 2021 Annual Review of Materials Research.

One problem with the approach is that most luminescent material won’t glow all the way through the night. Better materials could help solve that problem, says Pisello, of the University of Perugia, who studies energy-efficient building materials. In the meantime, existing materials could be combined with electric lighting that would come on long enough to recharge the road markings before switching off again.

Luminescent paint could also provide outdoor area lighting. Pisello’s lab developed such a glow-in-the-dark paint and in a 2019 report, simulated what would happen if they painted a public path near a railway station with it. By glowing throughout the night, the paint would reduce energy needed for lighting by about 27 percent in the immediate area, the scientists found.

If this conjures worries of entire cities glaring throughout the night and adding to harmful light pollution, Pisello says that is unlikely. Luminescent materials would likely only replace existing lighting, not add to it. The color of the glowing materials could be chosen to avoid the blue frequencies that have been found especially harmful to wildlife.

Luminescent materials could also help fight what is known as the urban heat island effect. Rooftops and pavements absorb energy from the sun and emit it as heat, driving city summer temperatures an average of 7.7 degrees Celsius higher than in the surrounding countryside. The high temperatures are a potential health hazard and also result in more energy being used to cool buildings.

One increasingly common solution is to use “cool” materials that reflect light, such as white paint and light-colored asphalt. It turns out that adding luminescent materials can help even more.

At the Lawrence Berkeley Lab, Berdahl and his team experimented with synthetic ruby, a material that is luminescent while in sunlight, to make colored coatings that stayed cool. In an early experiment, they reported that a ruby-pigmented surface stayed cooler in the sun than a similarly colored material without the special pigment.

Pisello’s lab went one step further and added several persistently luminescent materials — ones that stored light energy and gave it off slowly —  to  concrete. Compared with non-luminescent surfaces of the same color, the best of them lowered the surrounding air temperature on sunny days by up to 3.3°C.

“You can make [a surface] as reflective as possible. But can you go beyond that? The idea is that maybe you can go a little bit beyond that using persistent luminescence as another way to transfer energy out…. It is interesting,” says Patrick E. Phelan, a mechanical engineer at Arizona State University who coauthored a paper on the urban heat island effect in the  Annual Review of Environment and Resources.

There are 250 known luminescent materials, many of them not yet studied for practical applications. Pisello says there is a potential for glowing paints and pavements that last longer and shine brighter in more colors.

“In the short term, the best and easiest solution is to improve what we already have,” she says. That includes tweaking materials so that they give out light longer, more strongly, or in different colors, and making sure they continue to work in real-world environments.

In the longer term, she adds, new classes of engineered materials could work even better. For instance, one could turn to “quantum dots” — tiny semiconducting particles that can be made to glow and that are already used in biological imaging — or perovskites, materials used in solar cells that are also being studied for their luminescent properties.

Government Increasingly Is Asking Citizens to Turn Each Other In. Here’s Why That’s So Dangerous.