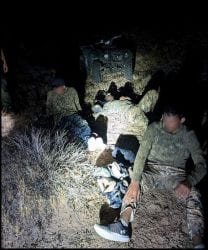 Late Tuesday night, Wellton Station agents encountered three Mexican nationals illegally present in the United States, who were traveling through the desert southeast of Dateland. When arrest was imminent, agents observed the group drop makeshift backpacks. The group was apprehended near where they dropped their cargo. Upon searching the backpacks, agents discovered 78 packages of methamphetamine. The total weight of the narcotics was approximately 79 pounds with an estimated street value of over $158,000.

The narcotics were seized and the three backpackers will be referred for criminal prosecution.

Understanding the Significance of the Gold Star